Illegal Structures To Be Pulled Down, Warns On The Heavier Rains Coming 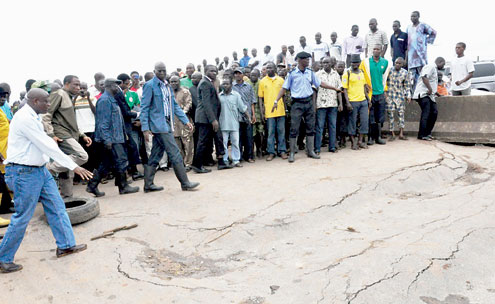 Governor Babatunde Fashola of Lagos State has vowed to demolish illegal buildings erected on the path of drainage channels, saying this was responsible for most of the flooding in the state.

The governor, who inspected sites of flooding in Lagos, South West Nigeria yesterday vowed that the state government could no longer cope with the buildings erected on drainage channels that cause flooding and result in loss of lives in the state.

According to him, his administration would now go into a serious regime of enforcement and compliance â€œbecause some people would still not conform to regulations that guide property development and physical planning in the state and therefore would need the government to be uncompromising with enforcement.

â€œI have directed all ministries and sgencies to go out and ensure that while being civil and courteous they should strictly enforce the regulations.

â€œMany of the places where the impact of this flood is devastating are places where people have built very closely to the canal which is like people literally going to meet the water in its course. They have either disturbed its course, built along its path and therefore after 16 hours of rainfall has exceeded its limits.â€

He added that â€œmany of the places where we visited, I doubt if you will find a building permit for any of the buildings including here (Arigbanla Street). There was no approval for all of these. Now, this is the challenge of urbanization. You may argue that government must do something but when people have already built before you lay out the plan, the road network, then it is an uphill task.

â€œWe must respond now to government rules and regulations. I want to appeal to community development associations and residents associations to strengthen their involvement in development. It requires more than the governor and the commissioners. It requires the totality of the community efforts to ensure that we get on top of this and we are prepared for any major challenge.â€

He said he wanted the residents associations to be more involved in compliance and enforcement of building regulations, stressing that those in buildings that had been marked as structurally unstable or designated as lying on canal paths should immediately start looking for alternative places because government will take possession of such structures.

Fashola stated that this was because government would hard on enforcement and would not take any risk on human lives anymore.

â€œThat is our primary responsibility and we would be uncompromising in the manner we have to deal with it. It remains for the people to live within the laws and rules in the state,â€ he said.

The governor, however, asked Lagosians to prepare for heavier rainfall saying that the weather reports had indicated that the rains would continue this week and urged the people to remain calm because whenever there was intense rainfall there would be flooding.

â€œWhere there is intense rainfall, you will see flood described as flash flooding, but be calm because once it subsides, the flood will go away. One of the reasons why we have the flood is because the canals, lagoons, river bodies and oceans are full; snow is melting from all over Europe. There is summer now, so this is our own period of bad weather.

â€œWe share the same body of water, the same Atlantic that serves Europe and America is what we share at the Bar Beach, so when those tides are full, the channels with which we draw water cannot get water to them. Lagos is a low lying state that is about 2 metres below sea level,â€ he said.

On the failed portions of the Abeokuta Expressway which he also inspected, Fashola declared: â€œWe have also seen the problem of Abeokuta Expressway. The culvert there is inadequate to deal with the storm water and we hope that the Federal Government will quickly respond.

â€œThis is an emergency because we have lost that road literally and that will affect transportation and the lives of the people who spend long hours in traffic.â€

Fashola, who also said he would be writing the President about the state of the Abeokuta Expressway after the stock taking was completed, charged the people that beyond the current seasonal challenge are a hard lesson that Nigerians must change their ways as a people.

Fashola stated that when the full audit was undertaken, he would appeal to the Federal Government to assist the state with funding to resettle and alleviate peopleâ€™s condition.

â€œWe have been on this from 7am yesterday. We have had reports from areas like Obawole, Iju, Ibeju Lekki, Ikota, Jakande, Aguda, Shomolu, Apapa Road, Akoka, Oke Odo, Alagbado, and AIT. If we canâ€™t get to you, we are aware and we sympathise with you.â€

The governor, sympathised with the victims of the flood and those who lost dear ones to the flood, adding that â€œsome people have lost children. We sympathise with them and pray for the repose of the souls of the kids. We condole with them and are saddened that this happened.â€