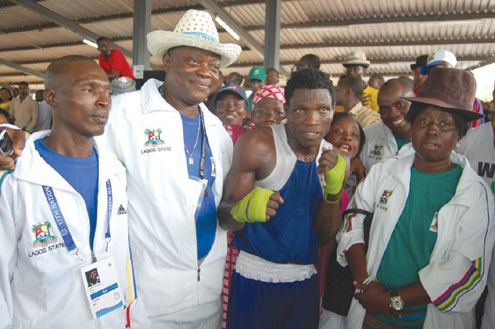 â€¢Olayide Fijabi (middle) celebrates after winning a gold medal in the boxing event of the Garden City Games with other members of Team Lagos in Port Harcourt.

With three days to the end of the 17th National Sports Festival in Port Harcourt, next yearâ€™s host, Lagos State increasingly began to feel the hit of finishing in the second half of the medals table. Members of the Lagos State Sports Council were making last minute calls to their athletes, trying to spur them on, particularly the boxers where the strength of the state lied.

The tensity and frenzy in their hotel rooms could quench the drizzling rain on the outside and the quest to rally the athletes to save the state from shame was similar to Sir Alex Ferguson psyching his 1999 treble heroes in the Champions league final against Bayern Munich.

Just like in 1999, Lagos State managed to muster 11 gold medals to finish a decent ninth position and they received the torch to host the next edition with their heads high. But that could be a Herculean task if certain irregularities are not observed before November next year.

More importantly is a genuine grassroots sports development, which Lagos has been the vanguard in the last few years.

P.M. Sports spoke to a number of athletes that represented Lagos State in Port Harcourt and they all had stories to tell.

Most of them agreed that continuity is key and retaining some of the officials is vital to their succession in future competitions.

The athletes, however, claimed that officials began to show more concern about their welfare when the stateâ€™s fortune on the medals table was dwindling badly.

Team Lagos suffered their first setback before the festival commenced. They were used as the experimental facility to test run the online accreditation process introduced by the National Sports Commission, NSC.

Athletes who spoke to P.M. Sports in confidence claimed that the state’s contingent only started preparing for the festival late to the kick-off date.

These dismal preparation led to some members of Team Lagos to represent other states particularly the host state. Irregular competitions and late disbursement of funds were other factors that contributed to their late surge on the medals table.

Itâ€™s important to state that Team Lagos won seven gold medals and placed seventh at the KADA Games in Kaduna in 2009, but won 16 in Port Harcourt and finished ninth. An appreciable improvement on the medals table, but not in the overall finish.

The state officials to Port Harcourt did pretty well to lift the spirit of their athletes by cheering them up at centres and reiterating the Governor Babatunde Fasholaâ€™s farewell speech at Rowe Park. Fashola had charged the team to put up credible defiant performances during the festival because they were representing the state. The state officials would be commended for not poaching athletes and maintaining the developmental scope of the festival, but poor preparation and dismal competitive calendar would hamper the state from going one further next year.

Team Lagos boxers excelled at the festival because they had regular fights and healthy competition courtesy of the monthly Hall of Fame bouts. Monsuru Liasu, Vice Chairman of the Lagos state Boxing Association, said boxing has remained the medal haul of Lagos State because the boxers compete every month. He added that regular competitions and tournaments will help other sports to win medals for the state. â€œDuring closed camp we worked tirelessly. We came to the games with intentions of winning 10 gold medals. Coach Femi Babafemi and the fighters were determined to win for the state and improve their career,â€ he said.

Boxing delivered seven gold medals with sterling performances from the boxers. The medals were pouring in by the hour on the second to the last day of the festival and Team Lagos officials, athletes and coaches were hugely relieved from the embarrassment that was lurking to undress them. Lagos State must consolidate on their performance at the just concluded festival by keeping the useful crop of officials that was in Port Harcourt to see the festival, most of whom have spoken of their readiness to use the positives they saw at the festival to make sure that next year would be a blast.

Most of the officials spoke of overhauling sports in Lagos State by letting go of overaged coaches and officials. The expectations of many athletes and officials across Nigeria is pretty high. Aminu Bizi Aminu, chairman, traditional sports, Jigawa state, told P.M. Sports that Jigawa State expect Lagos to deliver the best National Sports Festival ever. He added that he expects 150 percent from Lagos state.

â€œIâ€™m a Hausa man, but I have to praise Lagos State because they know the right thing to do. In general, I expect 150 per cent that is A-plus from Lagos State. They know how to organise sport and their standings on the medals table should not mean much,â€ he said.

Adewunmi Ogunsanya, Lagos State’s Director of Sports, is optimistic that the state will host a sublime festival next year, one that would surpass all the festivals including the recently concluded festival in Port Harcourt.

â€œLagos state will not poach athletes and we will not host to win next yearâ€™s festival at all costs. We will do everything right and we hope to surpass all other festivals held,â€ he stated.