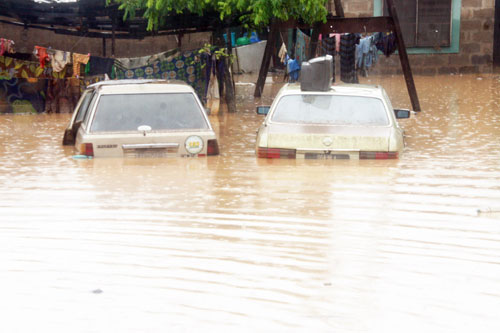 Governor Babatunde Fashola of Lagos State has cried out to the President Goodluck Jonathan-led Federal Government to come to the aid of the state in tackling the menace of flood, saying the state government alone cannot manage the problem.

The governor spoke while he continued his tour of areas affected by flood in Lagos, South West Nigeria following last Sundayâ€™s heavy rain that resulted in the loss of lives and properties.

He said the effect of the flood could not be managed by the state government alone, saying that he had to seek the assistance of the Federal Government to address the effects of the flood which now has a national impact.

The governor, who had toured flood affected areas in the Eti-Osa local Government Area, including the Alpha Beach where erosion had been further aggravated, said the Atlantic Ocean was currently redrawing the geographical map of Nigeria.

He added that the state government would do an estimate of the cost of providing palliative measures to stem the encroachment of the ccean and present same to the Federal Government for assistance.

â€œI am told that we need to put a shoreline protection like we did at the Bar Beach over a minimum area of three metres on the Alpha Beach. We are going to do an estimate and expect that we should get support from the Federal Government and the President,â€ he said.

According to Fashola, Jonathan had been very concerned and had called him to express concern and sympathise with the government and the people of Lagos State, adding that the next step was to do the financial costing which would be sent to the Federal Government.

On what the state government was doing on its part, Fashola disclosed that 10 major storm channels were under construction in the area, adding that the storm channels would assist in draining water from the Atlantic Ocean side of Eti Osa into the lagoon across the expressway.

He explained that the storm water construction would ensure there would be a reliable drainage infrastructure for Lekki and Eti-Osa region of the state on yearly basis.

Fashola, who inspected the Alpha Beach which had been severely eroded, explained that what had been witnessed at the beach was natural erosion which, according to him, â€œis a consequence of the rise in water level which is a result of global warming.

â€œWhat we need to do there is to reclaim the beach. We have lost about 50 metres of land to the ocean and it is continuing. You could see that the road has begun to cave in there. It is a natural disaster which is not as a result of the rain.â€

On the health risks to the residents of the flooded areas, Fshola said government was concerned by the body of water brought into the area by the flood which might carry some dangers in terms of water borne diseases.

â€œWe are just appealing to the citizens to be extra careful. As much as possible, wash your hands and feet regularly if you have to walk through the water, using regular soaps. Our health workers have been mobilised and will go round in the fullness of time to assist in the sanitization and also give you disinfectant where it is possible across communities,â€ he stated.

He appealed to the local government chairmen and community leaders to help and support the people in the area of hygiene, adding that the state government had opened collection centres in the Ministries of Health and Special Duties where public spirited people who want to donate relief materials to the people could go and donate.

On whether the activities of some traditional rulers might have been impeding the construction of some of the drainage channels, the governor said he would rather not identify the problem as the challenge of traditional rulers alone. On the NICON Estate in Ajah, Fashola stated that â€œgovernment is having challenges about building a storm water channel through the estate to drain water into the lagoon.

â€œIt is a judgmental call really about the value you put on land and I think that really is the issue. People place so much value and premium on their land, but at the end what is the value of a flooded land and a depreciating real estate. So, it is a question of real judgment to say, let me yield some of this land because government has no interest to take your land except to build a storm water channel through it so that your property is secured and safe and that is our responsibility,â€ he said.

According to him, â€œone way to do this is by building storm water channels and if you say we cannot use your land to build the storm water channel, maybe in 10 yearsâ€™ time you will have no land at all. If I were in a position that I would give away some land to keep more land instead of putting the whole estate at risk, I would do so. These are the kind of proposals that we will make.â€

He added: â€œwe have a similar problem with Chevron Estate at Okun-Afa and Igbokuta where the water drains from the drainage we are constructing from Silver Bird Television area in Maiyegun. This is the final outflow into the lagoon. If we canâ€™t cross through here, we canâ€™t solve the problem of that side.

â€œThe water has to come through this storm channel to get to the final drain which is the lagoon. So, if estates like NICON and CHEVRON and all of those community interests stand in our way, clearly they would have helped to endanger this whole community because we are ready to go.â€