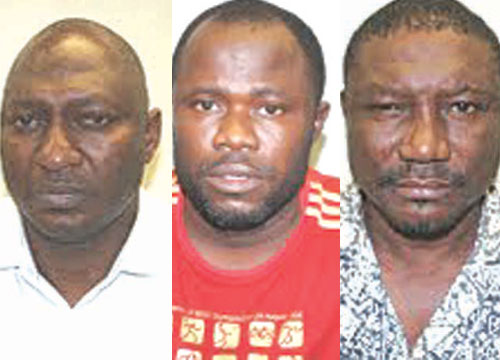 â€¢ (from left) Sunday, Enyinwa and Ganiyu, the three Nigerians jailed in UK for fraud.

The Nnamdi Azikiwe International Airport, NAIA, Command of the National Drug Law Enforcement Agency, NDLEA, Abuja, has arrested six suspected drug traffickers in connection with unlawful exportation of 7.51 kilogrammes of narcotics, the agency said in a statement this morning.

The drugs comprise 6.35 kilogrammes of cocaine and 1.16 kilogrammes of heroin with an estimated street value of N75 million, Mr. Mitchell Ofoyeju, the agencyâ€™s Head of Public Affairs said.

He said that one of the drug suspects ,who claimed to be a researcher, was nabbed with 1 kilogramme of cocaine concealed in his luggage on his way to Leeds through Amsterdam. Two other traders were to export 1.5 kilogrammes of cocaine to London and 1.16 kilogrammes of heroin to Florida, United States.

NDLEA said that preliminary investigation points to the fact that the suspect wanted to hide under the canopy of academic research to smuggle drugs unnoticed.

Owolabi Ganiyu who hails from Abeokuta in Ogun State, Southwest Nigeria, is married and has four children. The 52-year-old father swallowed 100 wraps of cocaine for a fee of 3,000 pounds.

â€œApart from the researcher that concealed 1 kilogramme of cocaine in his luggage during screening of KLM passengers to Amsterdam, Owolabi Ganiyu tested positive to drug ingestion during screening of British Airways flight to London. He later excreted 1.5kg of cocaine. Enyinwa Aka Ukeje also ingested 1.16kg of heroin on his way to the United States,â€ the NDLEA Commander at the Abuja Airport, Alhaji Hamisu Lawan, said.

Chairman/Chief Executive of the NDLEA, Ahmadu Giade, said that drug barons and traffickers will be caught and prosecuted.

â€œThere is always a day of reckoning and those who sow the seed of discord must be prepared to reap strife. We are determined to arrest all drug barons and prosecute them,â€ Giade said. The suspects will be arraigned in court soon, the NDLEA said without a specific date.