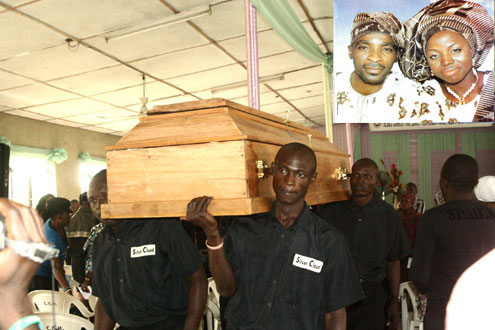 The casket of the deceased, late Taiwo Oloruntoba during a funeral service this morning at RCCG, City of Refuge Parish, Alagomeji, Yaba. Inset: The couple on their wedding day in August, 2009. PHOTOS: KOLA ALIYU.

Mourners have continued to besiege the Gbagada, Lagos home of a banker, Taiwo Abiola Oloruntoba, who together with his pregnant wife, Abosede Adeola, were swept away by the flood that ravaged many parts of Lagos State, South West Nigeria, on Sunday.

P.M.NEWS gathered that Taiwo and his wife had gone on a visit after church service and were returning to their Gbagada home when they were swept away by the flood caused by Sundayâ€™s torrential rain.

It was learnt further that as the couple approached an area near the canal in Gbagada, passersby were said to have warned them of the danger ahead because the road was heavily flooded, but the warnings were allegedly ignored.

P.M.NEWS also gathered that at a point, the wife, who was on the wheels could no longer control the car in which they were riding and in an attempt to allow the husband take over the driving of the car from her, the wife was said to have been swept away, while Taiwo, who could swim, also attempted to save his wife but got stuck in the mud, while the wife was eventually swept away.

Family members did not know about what happened to the young couple until the following day.

It was the bankerâ€™s colleagues at Guaranty Trust Bank, Mobolaji Bank-Anthony Way, Ikeja branch, who called to know why Taiwo, who, was a Cash Officer, was holding the key to the bankâ€™s strong room was not in office the following day that led to a search for him. This led to the discovery of his body in the swamp very close to the car.

The corpse of the wife was said to have been recovered somewhere around Majidun along Lagos-Ikorodu road.

When P.M.NEWS visited the 3C, Olaiya Street, Makoko, Yaba, Lagos residence of Dr. and Mrs. Oloruntoba, the parents of the banker, his father was too devastated to comment on the incident, while the mother was said to have been taken to an undisclosed place.

But one of his siblings also called Taiwo, said his brother moved from his Popoola Street, Bariga to his new home just two weeks ago without the knowledge of the family until the incident occurred.

According to him, the 33-year old banker was going to be ordained as a parish pastor this Sunday at the Redeemed Christian Church of God, City of Refuge Parish, Alagomeji, Yaba, Lagos.

The remains of Abosede were buried on Tuesday at Atan Cemetery, Yaba, while those of her husband were interred today also at Atan, after a funeral service at the Redeemed Christian Church of God, City of Refuge Parish.

Meanwhile, some sympathisers who visited the Gbagada home of the deceased have complained about the buildings constructed near the canal in the area and called on the state government to demolish the structures in order to prevent further loss of lives and property caused by flood as witnessed across the state on Sunday.