Manâ€™s Penis Cut Off While Asleep 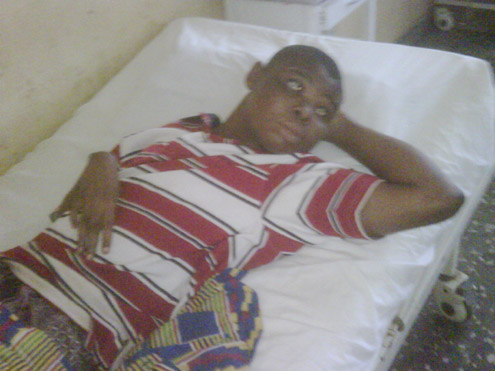 The victim, Chima Ejiofor, lying critically ill in the hospital after his penis was cut off by an unidentified person.

A young man called Chima Ejiofor is lying critically ill in the casualty section of the University of Calabar Teaching Hospital, after an unidentified person cut off his penis while he slept at the Akim Market in Calabar, Cross River State, Southeast Nigeria.

Chima, 25, who is in severe pains in the hospital, told P.M.NEWS that in the early hours of the fateful day, he was still asleep when someone stealthily cut off his penis and fled.

â€œI was still sleeping around 5 a.m. when I felt a sharp cut on my penis and blood started coming out and I started shouting but I did not see who did it,â€ he told P.M.NEWS.

He said he was rushed to the UCTH by some policemen who were on patrol that early morning where doctors saved his life by carrying out an operation on him.

Chima said his mother lives at 8, Abang Aseng Street, Calabar and does not care about him.

â€œSince I was brought here, she only came here today (Wednesday) and did not even bring food for me. She sells akara (bean cakes) and pap and each time she sees me in Akim Market, she pretends she does not know me. My father is in Imo State and also does not care about me,â€ he said.

â€œNobody paid for the drugs we are giving him. Our primary responsibility here is to save life that is why we are treating him,â€ the source said.

The Police Public Relations Officer for the Cross River Police Command, A S P Etim Dickson says nobody has been arrested in connection with the incident â€œbut investigations are still going on.â€