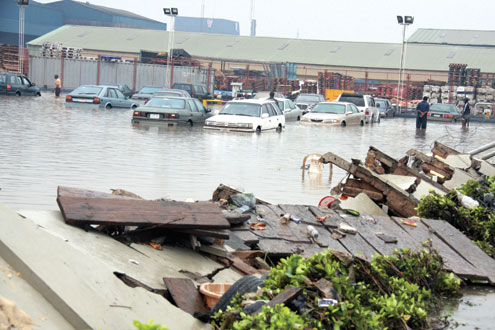 National Assembly members from Lagos State have called on the Federal Government to assist the state as a matter of urgent national importance to mitigate the challenges of the recent flooding in the state, especially in the area of accessing ecological funds and the protection of a wide expanse of the coastline in the state.

This call was made by Senators and House of Representatives members from the state after their fact-finding tour of flood-affected areas of Lagos State. The group also visited the failed portion of the Lagosâ€“Abeokuta Expressway which caved in after last week’s torrential rain,which has caused untold hardship to residents of the state.

The visit of the Federal Lawmakers was sequel to a motion at the Upper Legislative chamber by the Senators from the state who called on Federal Government to immediately assist Lagos in addressing the challenges posed by flooding following the heavy down pour.

Senator Oluremi Tinubu whose Lagos Central Senatorial district covers Eti-Osa and Lekki areas of the state, two of the areas badly hit by the environmental challenges, gave kudos to the state government for the proactive approaches it took before and after the floods â€œbecause it really shows that drainage channels in the state were really active during the downpour.â€

Tinubu disclosed further that shipwrecks along the coastline of Lagos must be removed to save the state from further ecological challenges and called on the people of the state to reciprocate the determination of the state government in ensuring free flow of water in the drainage channels by not impeding the drains with refuse and physical structures.

A Federal Lawmaker, representing Eti-Osa Federal Constituency in the House of Representatives, Hon. Jide Akinloye said the visit was necessitated by the desire of the National Assembly members from Lagos State to get first hand information on the severity of the flooding, adding that the final solution t.

Akinloye, whose Federal Constituency covers the Lekki, Ikoyi,Victoria-Island and Obalende areas of the state said the issue of shipwrecks along the coastline of beaches in the state, especially at Alpha-Beach had affected the tourism activities in the area and also, increased the menace of erosion which had cut the Alpha Beach road into many parts.

Other legislators, including Senators Gbenga Ashafa, Ganiu Solomon, Hon. James Faleke who spoke after the tour appealed to the Federal Government to assist Lagos State to access the Ecological Funds to address present challenges and mitigate future occurrence.