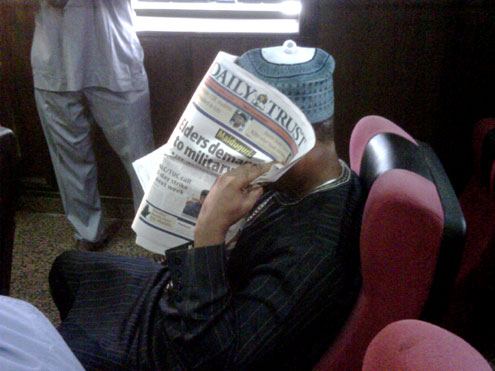 One of the accused persons hiding his face.

Five serving police officers were on Tuesday arraigned by the Federal Government before Justice Donatus Okorowo of a Federal High Court sitting in Abuja for allegedly killing the leader of the Boko Haram sect, Malam Mohammed Yusuf and some of his followers.

They were arraigned on fresh charges of terrorism and extra-judicial killing allegedly committed in Maiduguri, the Borno state capital on 30 July, 2009.

The fresh charge from the office of the Attorney General of the Federation and Minister of Justice alleged that the five accused persons conspired with one another in 2009 and summarily executed the Boko Haram Sect Leader shortly after he was handed over to the police by soldiers who arrested him.

The offence was said to be contrary to section 516 of the Criminal Code Act Cap C38, laws of the federation of Nigeria 2004 and punishable under section 15 (1)(2) of the Economic and Financial Crimes Commission Act 2004.

However the accused persons who were attached to Borno State Police Command pleaded not guilty to the two-count charge.

The presiding judge allowed four of the accused persons who had earlier been granted bail by the Kaduna division of the court to continue enjoying their bail while the fifth accused person, Sergeant Adamu Gado who was recently arrested and is appearing for the first time in the murder case was remanded in Kuje prison where he would stay until 28 July when his bail application would be moved.

His counsel, Mr. Edwin Inegedu who came to the court with a written application for bail of the accused was not allowed to move it

Counsel to the Federal Government Mr. R. M. Ojabo had opposed the hearing of the bail application on the ground that a copy was served on him in the court and demanded for time to react to issues raised by the accused person.

The five policemen were said to have summarily executed Mohammed Yusuf in retaliation for over 30 policemen shot dead by the dreaded Boko Haram members in 2009 in Maiduguri.