I Hide Guns In My Motherâ€™s Cupboard, Says Robbery Suspect 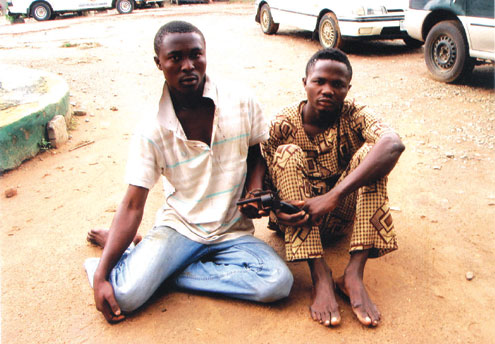 A robbery suspect, Sodiq Olabisi, 24, has confessed to the police that he used to hide the guns members of his gang used during operations inside his motherâ€™s cupboard.

The Ibadan, Oyo State-born Olabisi told P.M.NEWS that he trained as a tailor but he was recently introduced into armed robbery by a friend.

However, luck ran out on Olabisi in May this year when his gang of four robbers waylaid a trailer at Itamega area of Ikorodu.

But only Olabisi was arrested while the other three accomplices escaped.

He gave the names of his gang members who were on the run as: Saheed, Dada and â€˜Soft-touchâ€™.

Olabisi lamented that the robbery operation that led to his arrest fetched him only N1,400, stressing: â€œThey gave me only N1,400. All the handsets we snatched were shared by my senior colleagues.â€

Speaking on how he took possession of the gangâ€™s guns, Olabisi claimed they were formerly in the custody of Saheed. But when Saheed said one of the guns with him was missing, the group leader ordered that he should collect the guns for safe keeping. And he had since then been keeping them inside his motherâ€™s cupboard.

The suspect said he has a wife who resides with her mother in Orile Iganmu in Lagos and they were blessed with a child.

The second robbery suspect presently held by the police at Sagamu road division, Ikorodu, Lagos, Sunday Adegbola, also a native of Ibadan, said he was a cobbler before his brother-in-law, Kingsley Amadi, introduced him into the â€˜businessâ€™.

He confessed that his group of six robbers specialised in car snatching, adding that on the day of their last operation, his gang had successfully snatched a Honda car from its owner at Radio area in Ikorodu.

But luck ran out on them as they approached the Sabo, Ikorodu Roundabout near the cemetery, where they were involved in an accident. As the police approached, each member of the gang ran in different direction. Their driver, Kingsley Amadi was shot and arrested by the police at the scene of the robbery.

Sunday Adegbola was also picked up at the police station when relations of his wife forced him to bring his in-law who went out with him.

He went to the police station and was arrested.

The owner of the car told the police that they snatched the car from him at gun point, a statement that further complicated their problems, the suspect confessed.

He said: â€œAfter the operations, we gathered all the guns and gave them to Saheed, who is still on the run, to keep. That is the reason no guns were found in our possession when we were arrested.â€

Adegbola said they used to meet at a hotel in Lagos where his elder sister was selling hot drinks and marijuana.

Speaking with P.M.NEWS, the Divisional Police Officer, DPO, of Sagamu road Police Division, SP Ukadike Anamazobi said until they were arrested, members of the community could not believe that it was the youngsters that were terrorising the area.

He attributed the success of his men to the motivation of the Lagos State Commissioner of Police, Mr. Yakubu Alkali and the support of the state government.

Anamazobi said his men would not rest on their oars in their effort to rid the community of robbers and other sundry criminals.

The suspects may soon be arraigned in court.