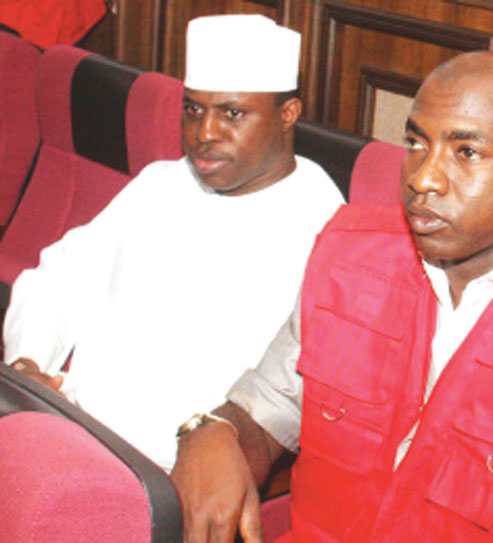 The former Speaker of the House of Representatives, Dimeji Bankole has asked an Abuja High Court to disqualify Festus Keyamo who was appointed by the Economic and Financial Crimes Commission, EFCC, to prosecute him for allegedly obtaining a N38 billion loan.

Consequently, the court fixed 25 July to hear the application and other objections that are pending before it.

Bankole, who is standing trial before Justice Suleiman Belgore along with his former deputy, Usman Nafada had brought the application through his counsel, Chief Adegboyega Awomolo, a Senior Advocate of Nigeria, on the ground that Keyamo had embarked on persecution of Bankole while he was in office as Speaker.

Prosecution counsel,Festus Keyamo told the court that the defence counsel served him the application very late on Monday evening and that he had responded to it, adding that the court should consolidate all objections and hear them together in order to expedite the trial.

Counsel to Nafada, Mr. Sola Oyetibo, also a Senior Advocate of Nigeria, told the court that he had read the objection of the former Speaker as regards the disqualification of the prosecution counsel and that he was fully in support.

He therefore prayed the court to hear the objection first.

Awomolo had earlier urged the court to hear his objection first as it would determine whether the court will proceed to hear other applications.

He further informed the court that the reply to his objection had just been served on him in the court and that he would need time to respond to it.

He prayed for a short adjournment.

In a brief ruling, Justice Belgore consolidated all the objections and fixed 25 July to hear them and warned parties to desist from giving processes that had not been filed before the court to newsmen.

Bankole and Nafada who are standing trial for allegedly obtaining illegal loans to the tune of N38 billion from UBA, to pay enhanced running costs and allowances of House members contrary to the provisions of the laws had earlier been admitted to bail by the court and had been enjoying bail.