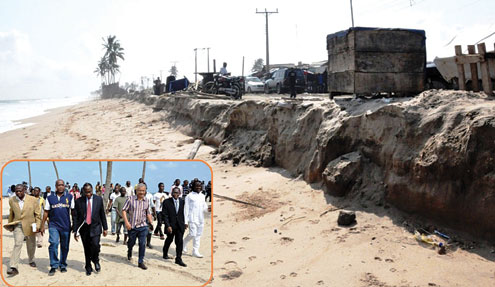 In the next three months, thousands of houses and residents abutting the Alpha Beach in Lekki area of Lagos State, Southwest Nigeria will be sacked by coastal erosion by the ocean, warns the Lagos State Government.

Already, in the last two weeks, the 20 metres of coastline has been lost to the ocean as the water from the sea is less than 70 metres away from residential area and several shanties abutting the ocean.

Commissioner for Waterfront Development and Infrastructure, Prince Segun Oniru disclosed this on Monday when a team from the Federal Government came to inspect the level of damage caused by the recent flood in Lagos and submit its finding to President Goodluck Jonathan.

The team was led by the Minister of Trade and Investment, Dr. Olusegun Aganga, while the Permanent Secretary, Ecological Funds in the Office of the Presidency, Mrs. Ibukun Odusote was also in the team. The team inspected the Mayegun Beach where several shipwrecks are causing coastal erosion in the area and the Alpha Beach faced with the same problem of coastal erosion.

According to Oniru, who spoke at the Alpha Beach, residents in the area were in grave danger as the water from the ocean is fast approaching residential area and called on the Federal Government to do something urgent to safeguard the lives of people and properties.

He said the only urgent solution to halt the coastal erosion was for the Federal Government to reclaim the lost area to the beach by creating an embankment like it was done to the Bar Beach to prevent it from eroding the Ahmadu Bello Way.

â€œI cannot say how much it will cost to solve the problem of the beach but the Federal Government still needs to come to inspect the area to find solution to it.

â€œYou canâ€™t fight nature but you can only appease it. We need to push back the water and protect the beach from eroding. If nothing is done, in the next three to six months, everything you see here (houses and people) wonâ€™t be here anymore. In the last two weeks, we have lost 20 metres of the coastline to the ocean. What we are witnessing at the beach is natural erosion and a consequence of the rise in water level which is a result of global warming,â€ he stated.

He said the Alpha Beach which had been severely eroded and had damaged the roads needed urgent attention to save the impending danger.

Also speaking, Aganga said the Federal Government would surely come to the aid of Lagos, saying that the state government had already compiled what it needed, which he said would be forwarded to the president for action.

â€œWe have heard that 20 metres of coastline had already been lost to the ocean in the last two weeks and that if we donâ€™t do something about it, the people you see behind you here wonâ€™t be here anymore. We are here to assess the situation,â€ he said.

During the tour, Commissioner for the Environment, Mr. Tunji Bello disclosed that tackling the flood and its devastating effects on the State Government would cost about N13 billion.

He stated that the state government had commenced the demolition of buildings erected on drainage channels across the state.

â€œGo to Iganmu today, we have started work to remove the structures obstructing the drains. Also, we are moving to Shomolu.

We are moving to Agege and once we finish relocating people that have to be relocated we will continue with the demolition.

â€œApart from the areas where they have problems, the drainages are working, the channels are working; they have been de-silted and those areas that have not been properly de-silted, we will go back there to de-silt the channels,â€ he said.

Speaking, the Permanent Secretary, Ecological Funds in the Office of the Presidency, Mrs. Odusote said the purpose of the visit was to show â€œour concern for Lagos State. We had done quite a number of things before coming physically now and having gone round all these areas of problems and issues, I believe that by the time we are going back, we expect that we would package whatever it is in collaboration with the Lagos State Government to be able to know the areas of solution that the Federal Government will be able to address.

â€œBecause there is a commitment, that is why we are here; otherwise, we wouldnâ€™t have bothered to come here at all. The President actually directed that we should physically come to assess what is happening, even after the water has receded, so that we can know where the problems are and for this area, we have seen quite a lot.

â€œWhat it means is that we are going to be able to deal with them all at once or break them into phases and ensure that solutions come; but definitely, we are expecting that solution will come through the Federal Government,â€ she stated. On whether funds would be released to mitigate the flood disaster, she said â€œeven last year , if you remember, when there was a heavy downpour, the Federal Government came in handy and provided quite a huge sum to the State Government to ensure that there is mitigation at whatever level it could be done.â€