I Have Never Acted Nude Roles 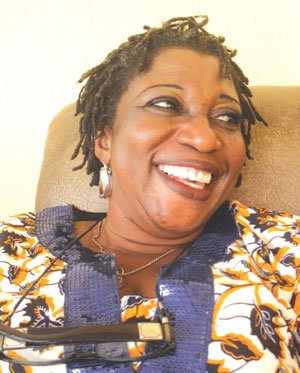 Â Veteran, multiple award-winning actress, Binta Ayo Mogaji-Oduleye, who recently relocated to the UK, is in the country to execute some projects. The no-nonsense actress spoke on why she relocated, the film industry and other issues

What has been happening to you?

Nothing. I have been a housewife and working at the same time, you know, I relocated to the UK and have come home to work.

Why did you relocate to the UK?

That is where my husband and family live.

Wonâ€™t it be expensive shuttling Nigeria and the UK?

How do you combine motherhood and acting?

That is why I come home to work and any time I am in England, I take the position of a housewife.

As a woman about town, how do you cope as a housewife?

I go to social functions, visit friends, play with computer and write stories.

What are you doing now?

I am working on a lot of TV series, that is why I am home.

Which of the series are you doing now?

Do you pay for your travel ticket from the proceeds?

Well, that is supposed to be my personal problem.

A few years ago, you were known for weird roles in films, why the change now?

No, I wasnâ€™t playing weird roles but the role or character a director tells me to play. So if you consider it wild or calm, I donâ€™t choose those roles by myself.

Is that why you choose your scripts lately?

Why is this so?

I am not stupid. Am I not an actress?

Who gave you a break in the film industry?

While growing up, what was on your mind? Did you think you will ever be an actress?

No, I wanted to be a lawyer or a uniformed person.

Does that affect your real character, I mean being blunt to a fault?

That is the way God created me.

How will you describe Ayo Mogaji on location, housewife and a weird person?

Well, I canâ€™t fault anybody for his or her belief. If they think I am weird, I canâ€™t fault anybody after all, I am who I am. If they believe I am weird, it means they donâ€™t know me because I have been in a place where people are talking about me until I opened my mouth to tell them that they didnâ€™t know me, yet they were discussing me in a public place like this. I told them my mind and left,

How then do you see yourself?

I am Ayo Mogaji, God fearing, a practising Muslim and donâ€™t like bluffing people.

What are you doing now?

I told you I always come home to shoot my TV series and I am planning my 30 years on stage. Although it has gone, I will still celebrate it and I am working towards that. In fact, I have constituted a committee for that and I am channeling all my focus into doing a TV serial.

Why TV serial and not home video?

I have been doing films and have even done a couple of them since my arrival. I have not done a personal film lately because the kind of money needed to produce it is not available yet.

A lot of people are of the opinion that most Yoruba films are substandard, what is your comment on this?

Ask them about Jombo, my film. It is only my film I know as I donâ€™t want to criticise other peopleâ€™s films. I donâ€™t want to know who markets them either, but all I know is that I produced a standard film.

What is your own idea of film production?

Maybe you should go and ask those people. Of the N4.1 million I spent, only N750,000 came from the marketer.

How do you make your money back?

Well, that is my personal business.

Have you really made money from acting?

I have been acting for 32 years, if that is not enough for me, I will not stick to it.

For 32 years, people believe you should have acquired so much wealth?

Why do you stay in Ibadan whenever you are in town?

My living in Ibadan is a matter of choice. I am not a hustler, but a very private person. Whichever way you look at it, you donâ€™t know that I love peaceful atmosphere, I have been living in Ibadan, Oyo State, since 1997 and I go out of the city to do my work. It does not matter where I live, even back in the UK, people call me and ask, â€œAunty Ayo, when are you coming home? I have some jobs for you.â€

Looking at the film industry, can you compare the old breed actors and actresses to the new ones?

Moral decadence is the order of the day now. Because of the computer age, we are overlooking our moral values, the way our younger ones dress in films is very alarming. The morality of smooching and kissing is alien to our culture, they donâ€™t even respect the parental guidance code. What are we trying to teach the younger ones? I will not do it, I take an aversion to it, but I will not condemn them, the only thing is that if I can call the shots, that is I am in charge. But it is so disheartening to see the kind of dresses they are wearing all in the name of fashion. It does not portray our culture well.

So kissing is not part of our culture?

I donâ€™t know if it is part of our culture, but I have heard people say feâ€™nu ko milâ€™enu, meaning kiss me, in Yoruba language, I donâ€™t think you have to go on screen and give the impression of how it is done in the film. That is not African.

So you have not done it in any of your films?

Go back and check all my films, I have never gone nude in any film. I have never done a smooching role, I have given a peck twice in a film and the only person is Antar Laniyan who happens to be my best friend in real life.

Even for a million dollars you cannot kiss in a movie?

A peck, yes, but kiss, no way. Even not in a film, that kind of personâ€¦â€¦. No, I canâ€™t do it. A lot of things are related to kissing that meet the ordinary eyes. I cannot be sharing that with every Tom, Dick and Harry. With the kind of moral values I grew up with, I cannot do it. Sometimes they do it just for doing sake and donâ€™t even know how to kiss, they just do it in a way that is so irritating and if you like, say it the way you want, I belong to Africa. I want to project Yoruba culture the way it should be.

How romantic are you?

I am a very romantic person, people I have gone out with can attest to that.

A lot of people believe that you have moved with the trend, why are you saying this?

I move with the trend but not the promiscuity attached to that trend. Promiscuity is not being trendy.

What about the boys?

Yes, it is part of moral decadence. I am one of the few pioneers in this industry and have come up with so many of it. When you watch Yoruba films nowadays, you see people saying Iyalaya e, iya baba e, etc. From where I am coming from, those are immoral things and must stop.