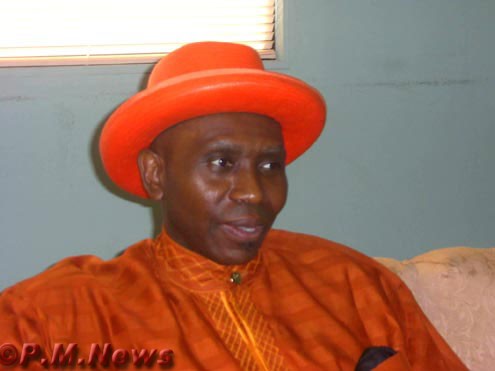 National President, Christian Association of Nigeria, CAN, Pastor Ayo Oritsejafor says the proposed Islamic Banking is an attempt to Islamise Nigeria and vowed that Christians will resist the move.

He carpeted the House of Representatives for endorsing the controversial Islamic banking in Nigeria, saying the House was merely carrying out a written script.

Oritsejafor, who spoke in Lagos, South West Nigeria at the weekend described what took place at the House as a sham, saying CAN was very disappointed, adding that hearing in the House had failed to assuage frayed nerves and pacify those Nigerians who had called for proper scrutiny of the Central Bank of Nigeria, CBN governorâ€™s attempt to Islamise the country.

â€œThe lawmakers failed to ask the CBN governor very probing questions about the workability of the Islamic bank, the plot to Islamise the country which has already begun by re-introduction of Arabic symbols in the nationâ€™s currency notes, and why Lamido Sanusi is using state funds to promote Islamic banking.â€

According to him, well meaning Nigerians heaved a sigh of relief when all the major news media carried reports that the House of Representatives after its plenary on Tuesday, summoned the CBN governor to explain the apex bankâ€™s stand on Islamic banking and the decision to peg daily cash withdrawal limit by individuals at N150,000 and N1 million for corporate customers effective 2012.

Oritsejafor further argued that â€œthe Christian community in Nigeria which has been kept in the dark all along over CBNâ€™s quest for an Islamic bank at the expense of other pressing economic issues has raised eyebrows over the workability of the policy which appears to be another attempt to Islamise the nation.

â€œThat was why we were happy at the cheery news of the House of Representativesâ€™ invitation to the CBN governor to explain his role in the controversial Islamic bank.

â€œBut we were shocked that the honourable members did not even ask the Islamic scholar any questions apparently because he used the occasion to bamboozle them. Instead, what we witnessed was a blanket endorsement of the policy.

â€œWhat we saw on television, was to say the least a sham. Little wonder people have continued to call for a sovereign national conference to address come of the socio-economic problems militating against the nation,â€ he added

â€œNow, a lot of money has been spent promoting Islamic banking. Why? Itâ€™s wrong. Itâ€™s unfair to spend all that government money on a sectional kind of banking. It is those who want to start Islamic bank that have the responsibility to spend that kind of money and do whatever they want to do to promote their bank. Why should you, as CBN governor of Nigeria, be promoting that sectional banking? Is he telling us now that when Christians start their own, heâ€™d go through all these?â€™â€™ he queried.

Oritsejafor further argued that the Christian Community had asked these and several other questions which nobody had found answers to; including the return of Arabic symbols on the nationâ€™s currency, after they were removed for three national languages during the Obasanjo regime.

Meanwhile, Pastor Tunde Bakare, Vice Presidential candidate of the Congress for Progressive Change (CPC), on Sunday dispelled fears that the proposed introduction of Islamic Banking was aimed at Islamising Nigeria.

The News Agency of Nigeria (NAN) reports that Bakare who is also the Pastor of Latter Rain Assembly (LRA), stated this in Lagos during a press briefing.

He described those criticizing the Central Bank of Nigeria (CBN) on the introduction of a non-interest banking system as being greedy, adding that ordinary Nigerians would benefit a lot. Bakare said: â€œ there is no legislation from CBN calling the particular product Islamic banking. Before Lamido Sanusi came, this system of banking was already being proposed.

â€œThe current 34 per cent interest rate being charged by banks is too excessive and I will quickly open an account once it is introduced because it will be beneficial to me.â€

On the criticisms trailing the Islamic banking, especially from the members of the Christian Association of Nigeria (CAN), he said that the leaders of the church were acting in their self interest.

â€œNobody can Islamise or Christianise any nation, including Nigeria. The problem of Nigeria is not about religion, but greed and corruption,â€ Bakare said.

The CPC vice presidential candidate also noted that rising inflation was responsible for the agitation by workers for a national minimum wage, stressing that no amount of increment can solve the problem.

â€œThey will increase your wages and take it away in taxes. The market women will increase prices of food stuff and commodities. This would lead to deflation and monetary failure which would further lead to economic upheaval.

â€œAny economic upheaval will lead to political upheaval and this is where Nigeria as a nation is heading to right now.â€

According to Bakare, Nigerians irrespective of their religion or ethnicity must be committed to challenge their leaders to be accountable on how the huge resources of the country were being spent.

Bakare also predicted that there will be a new Nigeria sooner than expected, asserting that the nation would experience a political upheaval that would usher in a better country.

â€œThere will be a generation of Nigerians who will choose to fight corruption and live righteously. This will be in my life time,â€ Bakare said.