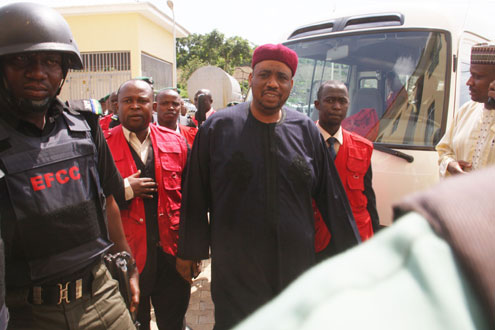 Former Speaker of the House of Representatives, Dimeji Bankole and his erstwhile deputy, Bayero Nafada, will have to wait till 21 October when an Abuja High Court where they are standing trial on an alleged criminal breach will deliver ruling on their application to quash the charge brought against them by the Economic and Financial Crimes Commission, EFCC.

At an intense legal tackles traded on Monday between them and EFCC, the duo, through their lawyers led by Chief Adegboyega Awomolo and Mr. Tayo Oyetibo, both Senior Advocates of Nigeria, vigorously challenged the competence of Mr. Festus Keyamo, a private prosecutor and self-acclaimed anti-corruption crusader, to prosecute them on behalf of Efcc for allegedly obtaining N38 billion loan from UBA for the payment of an enhanced package and running cost for members of the House of Representative.

Chief Adegboyega Awomolo, representing Hon Dimeji Bankole at the proceedings, argued that Keyamo had a running battle against the former Speaker since May 2008 when he accused the former Speaker of financial impropriety and had been calling for Bankole’s probe ever since.

He contended that allowing Keyamo to prosecute his client will amount to providing a platform for him to persecute the former speaker against whom he has an axe to grind.

Mr. Oyetibo, representing ex-Deputy Speaker, Nafada, while alligning himself with the submissions of Chief Awomolo, added that no one can purport to exercise the prosecutorial powers of the Attorney General of the Federation as espoused under section 174 (3) of the nation’s constitution outside the AGF himself and contended that Keyamo did not possess the authority of the AGF to prosecute his client as there was no sitting AGF when the charge was filed.

The defence lawyers also faulted the signing of the charge by Mr. Keyamo himself and argued that it ought not to be so, claiming that the charges are incompetent and urged the court to quash the charges and free their clients.

Oyetibo took their call for the quashing of the charges a notch higher when he argued that an account number issued by a bank cannot be said to be a property to be owned or entrusted as alleged in the charge for which his client is being tried.

He also stated that an account number cannot be subject to ownership.

The senior advocates contended that Keyamo will definitely act as a persecutor and not a prosecutor and will aim at satisfying his zeal to grind his axe with the accused persons if allowed by the court to prosecute the matter and that it would amount to a breach of the constitutional provision for fair hearing.

In his respnse, Keyamo called on the court not to disqualify him from the case and observed that all his actions against the former Speaker and others before him were part of his constitutional duty of holding public office holders to account which cannot be construed to mean having vendetta or personal attacks.

He contended that as far back as year 2000, that he called on the then Speaker of the House of Representatives Hon. Ghali Umar N’Abba to submit himself to probe over allegations of financial impropriety and went to court to enforce it.

He contended that his call for probe of Bankole as Speaker is consistent with his practice of holding politicians to account and urged the court not to restrain public citizens from enquiring into public affairs of our citizens.

Relying on the celeberated conviction of former Nigeria Ports Authority boss, Chief Bode George, Keyamo disagreed with the defence lawyers and argued that the fact that he signed the charge sheet does not nullify the charge as that aspect of the law was settled in the case of Bode George.

He challenged the defence to bring the Attorney General to court as he is the only one who can disprove that he issued a fiat to him to prosecute the case and nobody else and urged the court to allow the matter to proceed to trial before it can determine, after taking evidence, whether to quash the charges or not.

While conceding that non compliance with financial regulations is not in itself a crime, Keyamo argued that the breach of the regulations put in place to curb corruption in public affairs, is a conduct that amounts to an offence and prayed the court not to abort the matter at the stage but to allow the matter proceed to trial.

Justice Suleiman Belgore adjourned ruling on the matter till 21 October.

He also ordered for the release of the travel documents of the former Deputy Speaker, Bayero Nafada, to enable him perform lesser hajj in August but directed that they be returned to the EFCC by the third week of August.

The judge granted the request for the travelling papers of Nafada since the anti-graft agency did not oppose the application.