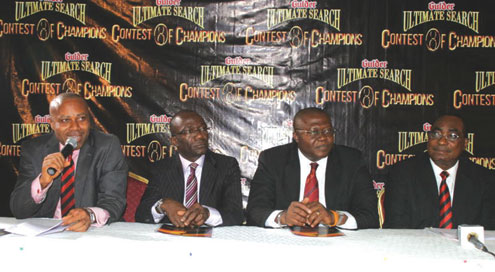 The eighth series of the annual Gulder Ultimate Search, a television reality show, organised by the Nigerian Breweries Plc, has kicked off and as usual, the setting this year will be the undulating plains and plateau of the Egbetua Quarter, Ososo Mountains in Akoko Edo, Edo State. Speaking at a media presentation in Lagos, Mr. Yusuf Ageni, Corporate Affairs Adviser to the brewing giant, said unlike the past editions when 10 young and brave individuals jostle for the ultimate title, this yearâ€™s will feature 30 young Nigerians. He noted that as it is the tradition of GUS, the search is expected to stretch a man to the very limit of his endurance. â€œThis search will not be for the faint-hearted, it will not be for the timid, only the fearless and determined 30 brave individuals will go on the mountains of Egbetua Ososo.

â€œOnly this league of ultimate men will venture to blaze the trail of this mountainous terrain,â€ Ageni said. These men and ladies, according to him, will battle against nature and the wild in the â€˜contest of championsâ€™ and only one will be crowned â€˜the champion of champions.â€™ Entry to the search is free and open from 26 July till 19 August, while the selection process will be rigorous with a national spread. Ageni said there is far improvement on this yearâ€™s edition as there will be twice a weeky highlights to be telecast from 17 September to 11 December, 2011 on national terrestrial and satellite TV stations.

â€œIt is a bumper edition that will span for 13 weeks, showing on Saturdays and Sundays with a repeat broadcast on Wednesdays every week,â€ he said. The reward at the end as usual, will be fame, fortune and much more as the brave individual who emerges as the Ultimate man or woman will be rewarded with a cash prize of N7 million, a wardrobe allowance of N500,000 and a brand new sport utility vehicle.