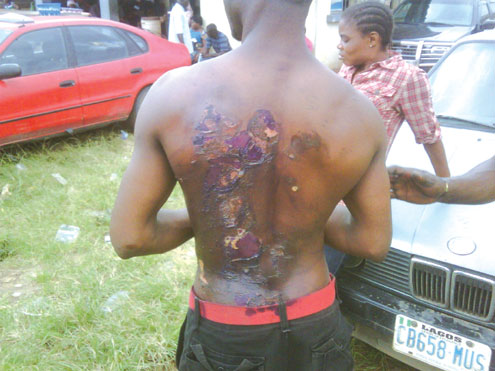 The victim with his scalded

A husband and his wife have been charged before the Apapa Magistrates’ Court for allegedly bathing their neighbour with hot water.

The couple, Enobi Uzoma, 27 and his wife, Chinenye, 27 were alleged to have poured hot water on Ifeanyi Ofuonye, 25, during a fight and his body was badly scalded.

He was rushed to the Apapa General Hospital where he is being treated.

The recuperating Ifeanyi told P.M.NEWS that Uzoma was his neighbour and friend. He said both of them were jobless before he started drawing survey plans for people.

He disclosed that Uzomaâ€™s behavior to him changed when he discovered that he was making progress in his business.

He revealed that at a time, the couple stopped greeting him, adding that this did not stop him from assisting Uzoma in getting a job.

He said he was shocked that Uzoma hired three area boys to attack him because he told him that he was travelling to Cross River State for business transaction the next day.

He explained that as he struggled to escape, Uzoma and his wife held him and poured hot water on him.

But Uzoma denied that he conspired with his wife to pour hot water on him.

He explained that it was during the scuffle between him and Ifeanyi that Ifeanyi fell on the hot water.

He admitted that both of them were friends until Ifeanyi started making progress in his business and started behaving arrogantly.

The action of the couple has landed them in prison custody because they were charged for conspiracy and attempted murder under Sections 516 and 302 of the Criminal Code, 2003.

The couple pleaded not guilty to the charges.

The prosecutor, Inspector Benedict Unabunwa told the court that the police would like to amend the charges at the next adjourned date.

The court upheld that the offence was a bailable one and granted them bail in the sum of N50,000 with one surety in like sum.

The matter has been adjourned till 26 September, 2011.