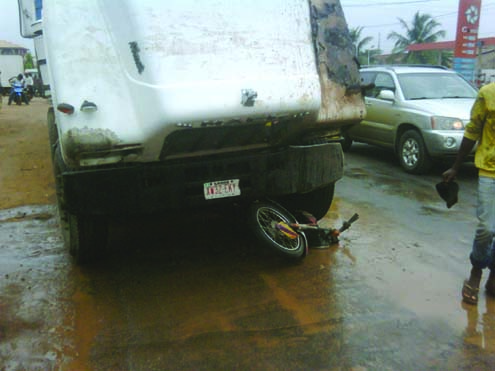 A truck with Lagos State registration number XW 32 EKY knocked down a motorcycle rider early this morning at Meiran axis of the Lagos-Abeokuta expressway.

According to an eye witness, the truck was said to have earlier hit a motorbike at Adura axis of the expressway but escaped.

He was trailed by a group of motorcyclists popularly known as okada riders down to Meiran axis.

In an attempt to stop the truck, the driver knocked down one of the motorcyclists. while the motorcycle was severely damaged. The cyclist, though wounded, narrowly escaped death. Information has it that the driver later absconded.

When P.M.NEWS visited the scene, an eyewitness said the okada rider had been taken away for treatment.