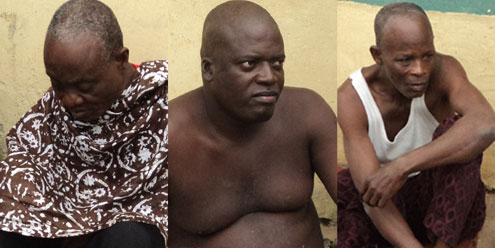 The police at Ifako Police Station in Gbagada, Lagos, Southwest Nigeria, have arrested a suspect in connection with an alleged kidnap of eight politicians. The victims, who were said to have been drugged before they were abducted, were said to be ward chairmen of Action Congress of Nigeria (ACN) in Bariga Local Council Development Area of Lagos State.

Police sources said the victims were returning from Ibafo in Ogun State, where they were billed to hold a meeting with the chairman of Bariga LCDA, Mr. Akeem Omoyele Sulaimon.

But the chairman, it was gathered, told them on telephone, that the meeting was no longer holding as he was attending another crucial one with the partyâ€™s leaders.

The eight kidnapped politicians were in a Nissan Quest van, marked LT 286 AAA. They were found unconscious when their suspected kidnapper was arrested.

Luck ran out on the suspected kidnapper when the vehicle knocked down a commercial motorcyclist at Gbagada roundabout and sped off without waiting to know what happened to the bike rider.

As he sped off, he was pursued by a commuter bus driver who later blocked the suspected kidnapperâ€™s vehicle.

Passersby soon noticed that seven occupants of the vehicle were unconscious while only one, later identified as Elder Emmanuel Otekaye was conscious.

The police were informed and they promptly came and arrested the suspect and took him and the victims to their station at Ifako-Gbagada, where Otekaye told them they were coming from Ibafo after a botched meeting and all of them were ACN ward chairmen in Bariga. He could not, however, explain further what happened before they ended up in the van.

Efforts by our reporter to speak with the suspect in the police cell proved futile at press time.

When P.M.NEWS called the Bariga LCDA chairman, Hon. Sulaiman on phone this morning, he did not pick his call, while he did not reply to a text message sent to him.