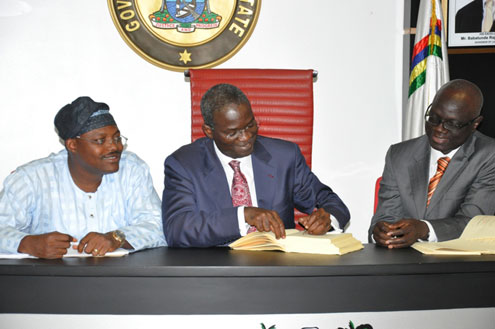 Lagos State Governor, Mr. Babatunde Fashola SAN (middle) signing two bills into law to Provide for the Establishment of Customary Courts, Administration of Justice under Customary Law and for Connected Purposes and Law to Regulate the Financial Management of Lagos State Government and Local Government Areas at the Conference Room, Lagos House, Alausa, Ikeja, on Monday, August 1, 2011. With him are: Attorney-General and Commissioner for Justice, Mr. Adeola Ipaye (right) and the Majority Leader, Lagos State House of Assembly, Hon. Ajibayo Adeyeye (left).

Lagos State Governor, Mr. Babatunde Fashola (SAN), on Monday signed a new Law to provide for the establishment of Customary Courts and another to regulate Financial Management in the State, saying one of the true tests of any law lies in the extent to which it gives value to governance and enhances service delivery to the people.

In a short remark before signing the two laws titled â€œLaw to provide for the Establishment of Customary Courts, Administration of Justice Under Customary Law and for Connected Purposesâ€ and â€œLaw to Regulate the Financial Management of Lagos State Government and Local Government Areasâ€ at the Lagos House, Alausa, Governor Fashola said one question that should be paramount when any parliament sets out to enact a law was whether or not such a law sets out to improve service delivery to the people.

â€œThese bills will find support with the executive, amongst other reasons, because they help to give value to governance. They help to improve service delivery to our people; and that should be one of the tests of any law that Parliament or government is championing,â€ the governor said.

For the Customary Courts Law, Governor Fashola said it has become expedient because, â€œsome of the fees, some of the costs and some of the practices in the old law have been overtaken by current events,â€ adding, â€œWe must also recognise that Customary laws are part of the body of laws that regulate our jurisprudence along with the received Common Law and laws that exist in Statute of General Application up to a point.

â€œTherefore, a Customary Courts Bill that seeks to regulate and promote the administration of justice with regards to Customary Courts is something that is most welcome. It helps us to promote the values that are essentially ours, that define our origins but, perhaps more importantly; it helps the Executive arm to give meaning to outlook of government as I enumerated in my inaugural speech that one of the things that we would spend our time on in this tenure is the maintenance of law and order and you could see from the Appropriation Law, the provisions that we have made for law and order in the current tenure,â€ the governor said.

â€œSo to the extent, therefore, that the Customary Court Law helps us to complete the process of the administration of Justice, not just the apprehension of offenders alone or the management of civil order, but also where there is disputes, where offenders are apprehended, they get justice in a very quick and efficient time and where there is dispute under the customary court rules, that can also be dealt with in record time and that aids the administration of Justice,â€ Governor Fashola said.

While presenting the bills, Majority Leader in the State House of Assembly, Hon. Ajibayo Adeyeye, said the new Customary Court Law 2011 is a 50-page law which repeals the old Customary Court Law 2004 of the state and which seeks to empower the Judicial Service Commission to establish the customary courts in Lagos State .

The bill, according to him, also states the composition and qualification of members of the customary court, the condition of service and tenure of members and also the procedure for appointment of clerks and bailiffs adding that the most important aspect of the bill is that it gives power to the Judicial Service Commission to designate a court to adjudicate on Islamic Law and matters relating to marriage, divorce custody and inheritance among other provisions.

With the accent to the law, there is now only one cadre of Customary Court in the state, the Majority Leader said.

He said the Financial Management Regulation Law seeks to regulate the financial management of the state and local governments as well as Local Council Development Areas of the state pointing out that its importance lies in the fact that it legitimises all the modern day financial best practices that Lagos State Government has brought to the fore from the previous administrations.

According to him, â€œThe bill establishes the duties, department and functions of the Commissioner in the Ministry of Finance and the Stateâ€™s Treasury Office. The bill also makes it clear that all revenues shall be deposited in the Stateâ€™s Consolidated Revenue Fund except state funds established for specific purposes/â€

The bill also prescribes the processes for withdrawals from the Consolidated Revenue Fund while it also seeks to establish the Development Fund from which all capital expenditures in the state shall be paid among other provisions of the bill.

Also present at the signing ceremony were the Attorney General and Commissioner for Justice, Mr. Ade Ipaiye; the Commissioner for Budget and Economic Planning, Mr. Ben Akabueze; the Special Adviser on Works, Engineer Ganiyu Johnson among other members of the State Executive Council as well as members of the State House of Assembly and other top government functionaries.