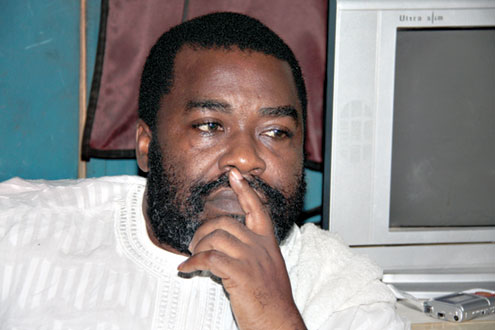 â€¢Princewill Arinze a.k.a. Nwobodo when he was paraded this morning at Ikeja Police Command PHOTO: IDOWU OGUNLEYE

A 49-year old Nigerian who claimed to be a Senator in Abuja, Princewill Arinze, has been arrested for alleged robbery by policemen attached to the Special Anti-Robbery Squad, SARS, in Ikeja, Lagos.

Arinze, who also claimed to be a member of the House of Representatives and an operative of the Economic and Financial Crimes Commission, EFCC, until his arrest, resides at 61 Road, Victoria Garden City, VGC, Lagos.

The suspect said he hails from Enugu State but his mother is from Edo State.

According to the police, Arinze usually calls bureau de change operators requesting them to bring American dollars to him and tells them that he wanted to travel to the U.S.

He was usually accompanied by two fake well armed policemen.

It was alleged that when the bureau de change operators bring dollars to him, his fake policemen would point guns at them and thereafter bundle them into Arinzeâ€™s red Land Rover SUV marked DG 339 RSH Abuja.

His victims were then driven to an unknown destination after which they will steal all their dollars and push them out of the vehicle.

According to a victim, Mohammed Dalatu, 23, a bureau de change operator at a hotel on Lagos Island, Arinze introduced himself as a Senator to his brother, and that he wanted to buy $13,000.

Dalatu, a native of Nasarawa in Kano narrated: â€œMy brother called me to give him the dollars at a bank in Lekki. When I got there, I called him on phone. He parked his SUV at the front of the bank. He asked if I was from Alhaji Kabiru, my elder brother. When I said yes, he told me to follow him inside his vehicle where three policemen armed with guns sat.

â€œSuddenly, I was pushed inside the vehicle by the policemen and driven towards Lekki second gate. Arinze, the suspect drove the vehicle. He ordered me to drop the $13,000 with the fake policemen and asked me to lower my head. When they got to a particular place, they pushed me off the vehicle.â€

Another victim called Pamela alleged that Arinze asked her to bring $14,000 to him at another bank in Ajah. When Pamela got there, he lied to the policemen at the bank that he was an EFCC operative trailing Pamela in order to arrest her.

Unknown to the policeman at the bank that Arinze was a fake EFCC operative, he assisted him to arrest Pamela. The victim was bundled into Arinzeâ€™s SUV and driven to an unknown destination where her $14,000 was snatched. She was also pushed off the SUV after that incident.

In 2008, Arinze also called a bureau de change operator, Alhaji Ali Yinusa to bring $30,000 to him at a bank. He snatched the money from him at gun point with the assistance of his fake policemen.

It was gathered that Arinze had been charged to a magistrateâ€™s court for a similar offence in the past. He was remanded in Ikoyi Prisons and released on bail. And he returned to his beat once again.