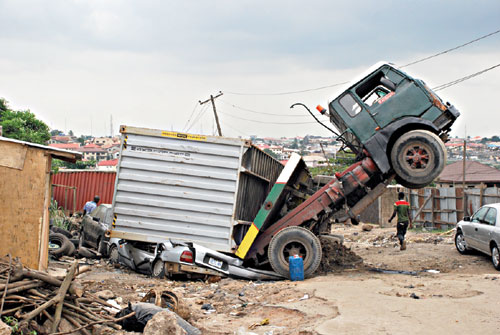 Although no life was lost, the affected cars were flattened and badly damaged.

Eye witnesses told P.M.NEWS that the truck loaded goods at a company close to where the incident happened. And while the driver was moving out to connect the main road to its destination, the trailer developed a fault. The driver went and brought spare parts and repaired the vehicle.

But when he attempted to drive the trailer after it had been repaired, the container fell off the moving vehicle and tripped the truck in the process. The container fell on the four cars parked by the roadside for sale.

None of the owners of the affected cars or the driver of the trailer was around to comment on the incident.