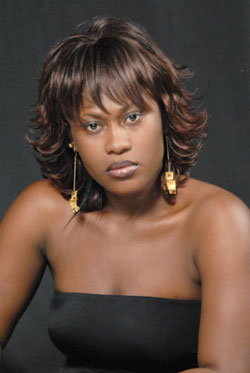 Actress Uche Jombo recently added another feat to her list of achievements with the premiere of the first part of her planned movie trilogy, Damage, recently at the Silverbird Galleria in Lagos.

The grand premiere that will go down in the diary of Nollywood events for a long time, had an almost endless list of stars and celebrities gracing the red carpet, some of who were Omotola Jalade-Ekeinde, Kate Henshaw, Funke Akindele, Stella Damasus, Iyabo Ojo, Chidi Mokeme, Yole Edochie, Nse Ekpe-Item, Basorge Tariah, Jnr., Osita Iheme, Tonto Dike, Peter of the P-Square duo, Omoni Oboli, Yul Edochie and so many others.

The thrilling movie tells the story of love and the pain of domestic violence with a style that projects the subject as one that has not been trod before in a movie.

A man (Kalu Ikeagwu) and his wife (Uche Jombo) love each other immensely, yet their day-to-day life can only be described as a â€˜cat and mouseâ€™ situation as they fight violently almost on daily basis and on the long run, effects of their fights is the psychological torture their children have to go through.

One may want to ask, with a million and one Nollywood stories that have been told about battery, what did Uche do to Damage to make it outstanding? But then, the answers are readily available. The producerâ€™s decision to look at domestic violence from both the male and female perspective in the family, the timely comic reliefs in the movie, timely and precise shots, great acting and directing as well as out-of-the-box casting, all added to Ucheâ€™s resolve to tell her story in a different way.

And for a young film maker who is just arriving the cinema, what does she expect from movie goers? Uche has this to say: â€œIâ€™m coming to the cinema with the first in a series of three movies and I have no fears at all about their success. I believe the true value of any entertainment product lies in its ability to educate, entertain and inform and all of this can be got from Damage. I believe we treated issues that concern us all, so I expect a good response and I am certain that this is a risk well taken.â€

Featuring Nollywoodâ€™s finest, Uche Jombo herself, Kalu Ikeagwu, Tonto Dikeh, Basorge Tariah, Jr. and others, Damage will start showing in cinemas across the nation from Friday.