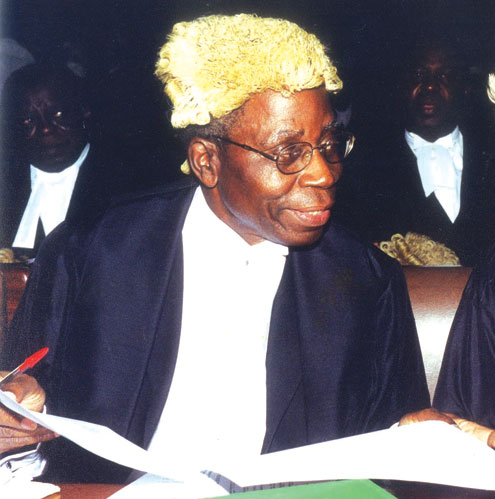 The duration of the film was about five minutes and was watched on two television sets. The first one faced the presiding judge, Justice Mojisola Dada and the second TV set faced the audience in the courtroom.

The pictures in the video clip showed the late Chief Bola Ige and the late Senator Abraham Adesanya and some leaders from the Southwest coming out of Aso Rock after a meeting with Gen. Abdusalami Abubakar.

The late Afenifere leader (Adesanya) later addressed journalists after the meeting with Gen. Abubakar, saying he was in support of a Government of National Unity and Sovereign National Conference to put in place a new constitution for the country.

Al-Mustapha said he can only recognise Ige and Adesanya out of all the leaders but that all of them were from the Southwest. The delegates, he said, were hosted by General Abubakar and the then National Security Adviser, NSA, General Abdullahi Mohammed.

As he said yesterday, in the video clip, after the short interview by Adesanya, the delegates hugged one another as they entered their vehicles and drove out of Aso Rock.

He said after Chief Olusegun Obasanjo became the president in 1999, it was the same General Abdullahi Mohammed who was appointed the NSA to Obasanjo. He said he was not in possession of the video clip of the arrival of the Southwest delegates as the video clips and other materials, including money and even the dust in Abachaâ€™s room, were taken away after his death.

These materials, he said, formed part of his handing over materials, which have been taken and destroyed by Generals Abdulsalami and Abdullahi.

He also tendered a letter dated July 5, 2001 which he wrote while in custody, to Chief Bola Ige. The letter was delivered by his lawyers, the late Clement Akpamgbo and Amobi Nzelu. The letter was admitted as exhibit after a heated argument by the defence and prosecuting counsel.

However, Justice Mojisola Dada, in her ruling, overruled the prosecution and admitted the letter as exhibit.

Thereafter, Mustaphaâ€™s lawyer, Olalekan Ojo sought the permission of the court to read part of the letter.

Al-Mustapha wrote: â€œYou and other Yoruba leaders were given money. But you did not know that you were being used to scuttle â€˜June 12â€™ as the then Head of State, General Abdusalami Abubakar played on the intelligence of Afenifere leaders to douse the tension in Yorubaland. Gen. Abubakar, who is being treated as a hero today embarked on psychological warfare.â€

Mustapha alleged further that, thereafter, money was paid to the media to champion this agenda. Part of the agenda was to convince them at all costs, he added.

The accused explained that he and others were surprised when they were arraigned before a Lagos Magistrate, adding that they were booed, chained, stoned and called â€œoleâ€, â€œoleâ€ at the court premises.

He disclosed that they were moved to Lagos from Abuja for their trial.

He also accused the former Chairman of the Economic and Financial Crimes Commission, EFCC, Malam Nuhu Ribadu, of torturing and humiliating him and others.

â€œRibadu instructed the driver of the Black Maria conveying us to court to enter potholes. As a result of this, Gen. Ishaya Bamaiyi and some others sustained injuries. After the court session, we were packed inside the Black Maria and returned to Abuja,â€ he said.

Mustapha alleged further that the then Commissioner of Police, Mike Okiro was ordered to kill him and others but that Okiro insisted on a letter of authority to that effect.

Following this, he claimed Okiro was transferred out of Lagos State.

He was still giving his evidence as at the time of filing this report.