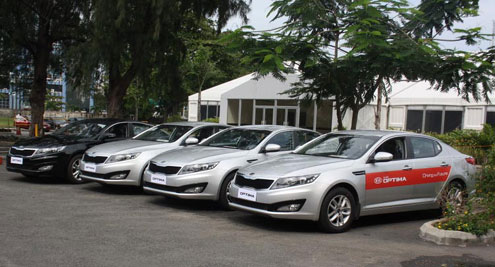 With the new Optima, Kiaâ€™s styling chief, Peter Schreyer, has proved once again that he is the man that has transformed the Korean brand from an unknown car to a serious contender. The German-born designer can be singled out as the biggest contributor to Kiaâ€™s rapidly rising fortunes in recent times. Before joining Kia in 2006, Schreyer had been designer at VW Group for many years where he was famed for his work on the Volkswagen New Beetle and more importantly, the original Audi TT, until now that he pencilled the new Optima.

One could hardly be blamed if the Kia Optima isnâ€™t the first name that comes to mind when considering a mid-sized sedan. Just five years ago, the Optima was a non-descript sedan that few knew existed let alone considered. A 2006 update produced a handsome design that offered solid value in the segment, but the Optima was still largely anonymous. The latest Optima, introduced as a 2011 model wears such striking styling that buyers are sure to take notice.

And if the Japanese ever did ignore the Koreans or dismissed them as worthy competitors, then the new Kia Optima must be the car that finally makes them sit up and take notice. Dubbed the K5, the third-generation Optima shares the same platform as the Hyundai Sonata (both marques belong to the same auto group anyway) but sporting its own styling identity.

The restyled Optima is larger and more substantial than its predecessor. Distinctive exterior styling elements such as the upswept rear windows, side vents, and chrome-trimmed roofline separate the Optima from more cautiously styled midsize sedans. The aggressive exterior styling is distinctive and sporty.

Kiaâ€™s fresh styling themes are reflected in the interior as well. The two-tone dash and instrument panel combines the gauge cluster and the center stack controls in to a single design element. The optional navigation system, audio system and HVAC controls are canted towards the driverâ€™s head. The brightly lit gauges are large, and attractive. In general, the instrumentation is stylish without being as gimmicky as other cars in the class.

More impressive though is the level of standard equipment – the cabin boasts features usually found only in luxury models. In addition to keyless entry and ignition, which may not be earth-shattering news, the Optima also, offers an â€˜easy accessâ€™ driverâ€™s memory seat that slides back for more comfortable egress. Both front seats are also ventilated, and there is a dual zone aircon with rear vents. Other details include airbags, USB and iPod connectivity, with full music interface for the latter.

But, perhaps the most remarkable feature doesnâ€™t even have to be touched in order to operate it – approach a locked Optima with key in pocket and the cabin lights will come on automatically. It has to be the first time such convenience is found outside the premium category.

With its striking design and extensive equipment and N4.5 million price, the new Kia Optima is a surprisingly capable model. It has good looks and good value, a combination not always found in a mass market brand and one certain to give the established Japanese makes a run for their money. This has to be the Optimal Kia.