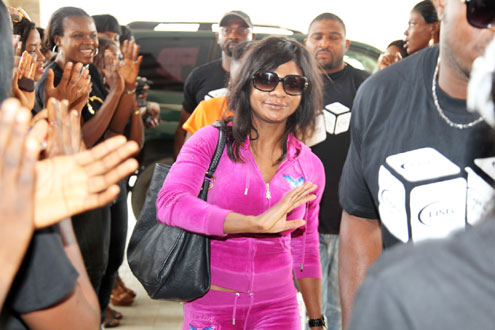 Karen with her fellow housemate and compatriot, Vina Longpet, arrived Nigeria at about 2p..m, aboard an Arik Air flight.

They were received by hundreds of fans of the Big Brother Africa Amplified who had thronged the Murtala Mohammed International Airport, Lagos to welcome them home.

Also at the airport to receive the Big Brother stars were some MultiChoice Nigeria executives led by Segun Alabi, Admin/Protocol Executive and Uche Nwagbaoso of Corporate Communications Department.

Karen, who declined to make comment on arrival, was ushered into a waiting car and driven to the MultiChoice office in Ikeja.

After outlasting 24 other housemates over 91 days, the duo of Karen and Zimbabweâ€™s Wendall Parson on Sunday 31 July, scooped the two $200 000 prizes in a spectacular show screened on DStv Channel 198 across Africa.

Karen and the others are expected to be hosted at a special welcome party tonight. The highly exclusive gig will feature performances from Nigerian acts as well as tributes from fans.

The story of 27-year old-Karen is a spellbinder. According to her, she did not know her father and her 45-year-old mother, who is her role-model, was a gangster.

Karen who is not happy with her father for abandoning her said she had to live with her grand-mum and hustled in Europe including working as a strip teaser at a gogo club.

She came back to Nigeria to participate in the 2008 Next Movie Star, another television reality show. She never made it to the top five at the reality show, but her Sundayâ€™s victory in Johannesburg has changed her story, ranking her among the new celebrities with instant fame and N32 million fortune.