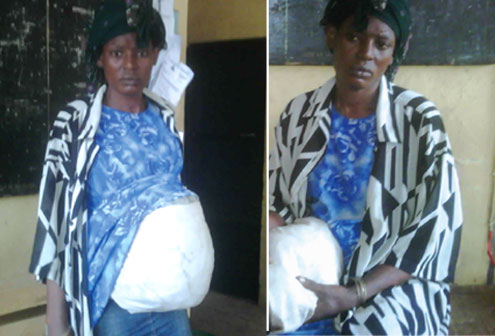 A 44-year old woman and mother of three children has been arrested by the police at the domestic wing of the Murtala Muhammed Airport in Lagos, Southwest Nigeria, for faking pregnancy to earn a living as a beggar.

The suspect, Mrs. Kemi Durojaye, was nabbed yesterday begging for alms at airport road in Ikeja with pieces of torn clothes she used to deceive passers-by stitched to her stomach.

Passers-by who have been seeing and giving her alms over the past three months were made to believe that she was near delivery time.

She claimed that she has no family member or job in Lagos and is begging to survive.

â€œI donâ€™t have anybody to help and I wouldnâ€™t steal,â€ Durojaye said.

â€œI was brought from Ikare to Lagos last year by a woman called Jumoke Omotosho to work. But when I got to Lagos, she told me to engage in prostitution and I refused.

â€œI found myself alone in Lagos with no money and I became a hairdresser but I lost that job and have nobody to feed me and I started this business.

â€œEveryday, I will make about N500 and it allows me to eat and make ends meet.

â€œI came from Ikare and I now live in the market. I have no house.

â€œI used to follow men that liked me but I just got tired and started begging.

â€œThose who know me at 8, Ipodo Street in Ikeja where I live in the market donâ€™t know I am into this.

â€œBut I had no choice but to do this or die,â€ she added.