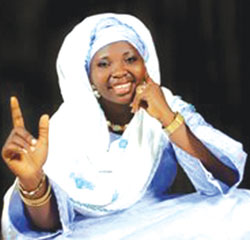 Dubbed Kunfayakun, the album, released last week in commemoration of this yearâ€™s Ramadan fast and the coming Eid-el- Fitri coming up at the end of August, is a follow up to her debut, Eni Aye nye.

Kafayat stated that the work was dropped for the season as it contains a special track, E dide, to wake Muslims at dawn to observe sahur.

The Eruwa, Oyo State-born sultry singer, added that the multi-purpose effort being distributed by Mega Star Entertainment, promises to be another masterpiece.