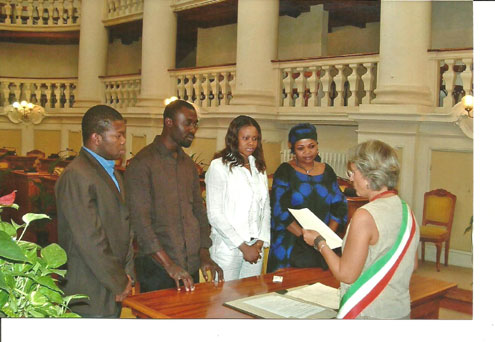 Prince Okojie and Lovely [middle] during their wedding at an Italy Registry.

during their wedding at an Italy Registry.”]

P.M NEWS gathered that the actress is currently considering whether to go on with the marriage or cancel it after an Italy-based lady, Lovely, said Mercyâ€™s husband-to-be is her legally married husband and they are yet to divorce.

Lovely, in an interview granted to an on-line magazine claimed with picture evidences that Prince Okojie is her husband and she has kids for him.

One of the pictures presented by Lovely shows her with Prince Okojie signing the dotted lines at the marriage registry, while another one shows the man with their two kids.

Meanwhile, a statement released by Mercyâ€™s publicist states that â€œyesterday, fresh facts and evidences about the marital status of Mercy Johnsonâ€™s fiance were made available. These facts were sensitive and disheartening. For the record, Mercy was not aware of most of these facts and is presently considering them. She will communicate her decisions in a matter of days.â€