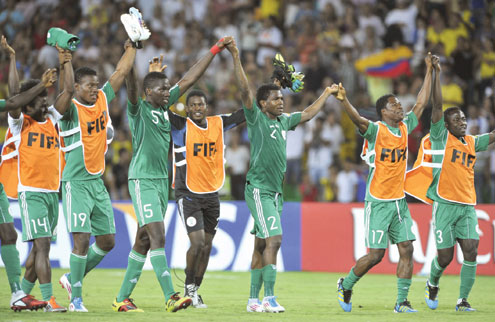 â€¢CELEBRATION...Nigeria's Flying Eagles celebrate their victory over England and qualification for the quarter final of the FIFA U-20 World Cup in Colombia. Nigeria beat England 1-0 in last night's Round of 16 Tie. Photo: AFP.

Nigeriaâ€™s Flying Eagles have scaled the hurdle of England to book a place in the quarter finals of the ongoing FIFA U-20 World Cup in Colombia.

John Obuh and his boys narrowly edged out England 1- 0 early today in Armenia. A 52nd minute goal by Edafe Egbedi proved the difference between both sides in a tightly contested game. The scorers of 12 goals in the group phase, Nigeria could only manage to squeeze one past England, who exited the tournament, having failed to score a goal or win a game, extending their winless run in the FIFA U-20 World Cup to 14 matches (five draws and nine defeats).

France on the other hand edged past Ecuador 1-0 to book a quarter-final meeting with the Nigerian team on Sunday and send the South Americans packing. A solitary second-half strike from Antoine Griezmann was the vital difference on a night where each side had several chances.

Speaking with fifa.com after the match, Nigeria coach, Obuh described the Round of 16 tie as a tough one, saying the English team gave his boys a good fight. According to him, â€œthe game was difficult for my players and we did not play as an attacking team. I expected them to play in an organised way but they were trying to attack without any real danger. The only thing that worked for us was the goal, which was enough to go through. Our opponent played a defensive game and they were launching counter attacks. We caused problems for ourselves, and in the next game we must correct the mistakes that we made.”

England coach, Brian Eastick, said although his team crashed out, he still believes they were the gallant losers in the encounter.

â€œIt was a close game and there was not much difference between the two teams. Of the four matches that we played in the competition, this was probably our best match as we had a good performance but we couldnâ€™t score. We had three or four chances in the second half that should have given us the game, but unfortunately, we couldnâ€™t take them. Thatâ€™s football; if you donâ€™t score you canâ€™t win the game. But if you say who created the best chances, and who was the best side in the game, then it would be England,â€ he said.