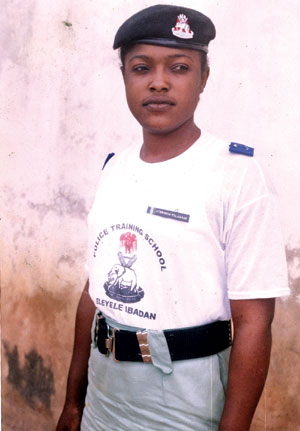 A 32-year old pregnant police corporal has died a day before she was expected to give evidence in court against a suspected ritualist.

Folashade was an indigene of Iju Itagbolu in Akure North Local Government Area of Ondo State and was seven months pregnant at the time she died.

P.M.NEWS investigation revealed that she was expected to give evidence in court against Gbenga Elepo, a suspected ritualist who allegedly masterminded the killing of Abel Obayomi, 36, at Oko/Paki, Onihale near Ifo, Ogun State.

The intestines of Obayomi were missing when his corpse was found in the bush three days after he was killed.

An eyewitness who pleaded anonymity narrated how Folashade died on the fateful day.

â€œShe prayed with her husband who is also a police officer and they both slept at about 11.30 p.m. She later received a phone call and thereafter she began to cough and sweat profusely.

She started vomiting and foaming in the mouth. She became uncomfortable and left the bedroom for the sitting room. She started crying and said â€˜Adura ni mo needâ€™, meaning â€œit is prayer that I needâ€.

â€œWe put her in a car and took her to Ifo General Hospital where she registered and what surprised us was that she urinated throughout the journey. The doctor at Ifo later confirmed her dead.â€

When P.M.NEWS visited her home at Oko-Paki, Onihale, Ifo, Ogun State this morning, residents were mourning the death of the woman corporal.

A resident in the area, Mrs. Muinat Salami, said: â€œThe suspected ritualist is a wicked man. People around here are afraid of him. The police officer died for fighting a meaningful cause. If not that she called in the police, the suspects, who allegedly killed Obayomi, would have fled. Two other accomplices are being trailed by the police. God will take care of the womanâ€™s children.â€

At the Eleweran State Criminal Investigation Department, SCID of the Ogun State Police Command, the police confirmed the incident and the death of the woman corporal.

The suspected ritualist and other accused persons have also been charged before a court.

They have been remanded in prison custody.