End Of The Road For 4 Car Thieves 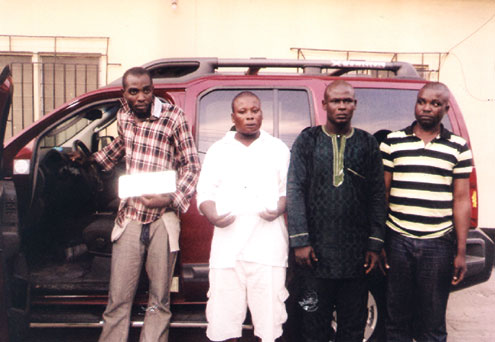 â€¢Idowu Odeyemi (l) and members of his gang after they were arrested by the police.

A suspected car thief, Idowu Odeyemi, and three members of his gang have been arrested by the police in Lagos for allegedly stealing his employerâ€™s Nissan SUV the same day he was employed.

He allegedly took the vehicle to a dealer to sell for him. He confessed to the police that he and members of his gang usually apply for a job as drivers and when employed, they later steal the vehicle and drive it to their base at Olodi Apapa, Lagos, Southwest Nigeria, to sell.

The police identified the driverâ€™s accomplices in the car stealing syndicate as Adams Satif, a car dealer and mechanic, Abubakar Yakubu and Samuel Akinyoye, who allegedly act as middlemen between the driver and the major car dealer, Adams.

P.M.NEWS gathered from a police source at Olodi Apapa that the driver who was employed on 4 August, 2011, allegedly committed the crime when he drove his boss, Mr. Babatunde Ayodele, to his office at about 8am the same day he was employed.

Instead of parking the Nissan SUV with registration number EF 927 KSF at the car park, he allegedly lied to the security guards at the gate that he was sent on an errand and he was allowed to drive out of the premises.

The bubble burst when his boss came out from his office to go home and the driver and the SUV were nowhere to be found. The security guards reportedly told the Ayodele that his driver told them that he was sent on an errand, a claim he denied.

P.M.NEWS learnt that after the boss waited till 6pm without seeing him, he dialled the runaway driverâ€™s phone number, but it was switched off.

He contacted the vehicle tracking company and they swung into action and tracked down the vehicle at Oyewole Street, Olodi Apapa, Ajegunle, Lagos.

The owner reported the matter at Ajeromi Police Station and the driver and his accomplices were arrested at the scene while removing parts of the car. The registration number had also been removed.

During investigation, the police discovered that the driver applied for the job with a fake name, John Balogun, claiming to be a member of Deeper Life Bible Church, Ebute Meta District. He also gave a fake residential address.

Items recovered from them include: Duplicated ignition keys of Nissan and Toyota car brands, forged customs papers, fake driverâ€™s licence and tools they use in dismantling stolen vehicles.

In his confessional statement to the police, Idowu said: â€œWe normally send one of our gang members out to go and apply for a job as a driver with somebody who owns an expensive Toyota and Nissan SUV. Our member applies with fake name, address and phone number.

â€œThe same day he is employed, he would find his way at all costs to drive away the vehicle to our base, where we would change parts of the vehicle and resell it and share the proceeds.

â€œWe have been in this business for a long time. We promise to repent now if we are let off the hook.â€

He did not tell the police in his statement the number of vehicles he and his gang have stolen.

All the suspects, according to the police source, have been transferred to the State Criminal Investigation Department, CID, Panti, Yaba, Lagos for further interrogation.

When P.M.NEWS visited the State CID Command, a senior police source confirmed the presence of the suspects and said they are undergoing interrogation, adding that after investigation, they would be charged to court.