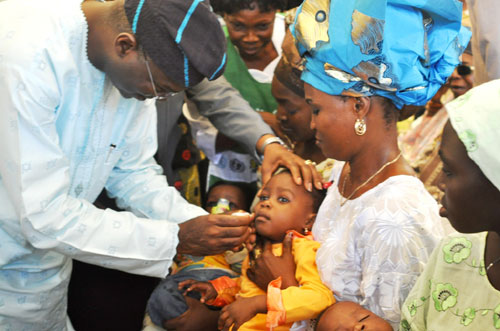 Lagos State Governor, Mr. Babatunde Fashola SAN (2nd left), immunizing a child during the Quartely Sensitization Programme on the Eradication of Polio of the Nigeria Governorsâ€™ Forum at the Oshodi Sports Centre (Jalisco) Oshodi Local Government Secretariat on Saturday August 13, 2011. With him is the Special Adviser to the Governor on Public Health, Dr. (Mrs.) Yewande Adeshina (2nd left), and others .

Governor Fashola who spoke at the Quarterly Sensitisation Programme on Eradication of Polio which was held at the Oshodi Sports Centre by Oshodi Local Government Secretariat, added that new babies are daily being born and therefore the immunisation must continue to ensure that all children between the ages of 0 to five are immunised.

â€œWhat is more profound is that it is taking place simultaneously in all the 36 states which is a follow up to the resolve of the Governors’ Forum to lead from the front the campaign to eradicate polio from Nigeria.

â€œSo it is not just going to be Lagos State and a few other States that are polio free but we intend to ensure that the whole country is polio free, because now only Nigeria and three other countries namely Pakistan, India and Afghanistan are still remaining in the world that have polio. When you look at it, those other three countries are so contiguous. Pakistan was created out of India and very close to Afghanistan and I wonder what we are doing in their midst,â€ the governor stated.

The Lagos State governor who also spoke to news men after the programme said the quarterly sensitisation will be followed by monthly analysis of immunisation reports and feedbacks from the various states commissioners for health, stressing that the polio eradication campaign is one victory which the Governorsâ€™ Forum is going to deliver and succeed with.

Governor Fashola asserted that there is no reported case of polio in Lagos anymore simply because the administration has been very steadfast in the immunisation campaign which has ensured that no child is left out.

He urged all parents to get the five immunisation types for their children from age 0 to five, saying the vaccines are always available freely for every child.

The governor said the administration is non discriminatory in its policies to both the able and disabled in the state, citing the example that only on Friday he gave directives for the engagement of a physically challenged but qualified person in the public service.

He also gave an assurance that government will continue to embark on advocacy programmes to sensitise the members of the public to realise the dangers that are inherent in leaving a single baby out of the immunisation drive because polio is caused by a virus which can easily spread.

Earlier while giving an overview of the polio disease, the Chairman of the State Primary Health Board, Dr (Mrs ) Yinka Abosede said polio is a virus which may be contracted if an infected person passes it out through excreta.

In his welcome address, the state Commissioner for Health, Dr Jide Idris said it is very cheery that Lagos State has remained a polio free state since April 2009, adding that this feat has been achieved largely due to the proactive measures adopted by the State Government.

He said the present administration in Lagos State has embarked on several measures which include capacity building of health workers and ensuring that routine immunisation exercises are also taken to previously untouched areas to reduce the risks.

Dr Idris added that in addition to social mobilization, there is now greater need to redouble efforts by everyone to ensure that no child of immunisation age is missed out in the polio drive, stressing that the risk is lower if everyone is immunised.

Also speaking, the Chairman of Oshodi- Isolo Local Government, Mr Hafiz Ipesa- Balogun gave a commitment that the Association of Local Governments of Nigeria (ALGON) on which he represents Lagos State Local Governments has plans to complement the efforts of the Governorsa’ Forum in the fight against polio.

The ceremony, which also featured an interactive session with members of the public on how to curb the spread of the disease, was co-ordinated by the Special Adviser on Public Health, Dr Yewande Adeshina with many of the contributors such as a community leader in Oshodi, Pa J.O. Olaleye, Rotarian Edward Olayinka and Mrs Risi Akitoye-Williams charging the government to do more to educate the people on the dangers inherent in not immunising their children when due.