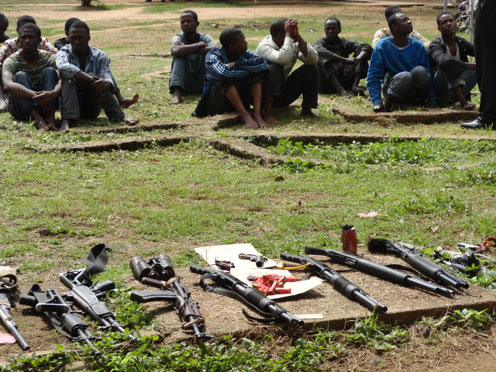 FILE PHOTO: The 24 armed robbery suspect paraded by the police in Kaduna.

Although the women were not paraded, a police source hinted P.M.NEWS that the women were always the baits used to reach out to their prospective victims whether in the case of car snatching or highway robbery.

P.M.NEWS also gathered that they allegedly operate mainly along Kano-Zaria road, Kaduna-Kafanchan Road and Kaduna â€“Jos road with the women standing on roadsides under the guise of asking for a lift .

Kaduna Police Commissioner, Ballah Nasarawa, while briefing newsmen at the headquarters, said all the armed robbery suspects during interrogation confessed to committing the crime.

According to the commissioner, the police got information about the criminal activities of the suspected robbers and swung into action immediately in all the areas they were operating and arrested them.

Though a few of them escaped during the process of conducting the search and arrest, Nasarawa vowed the police will continue to go after them until they are arrested.

The police urged members of the public to be vigilant and report anyone suspected to be a criminal where they live or work, and assured that the police would continue to ensure the safety of lives and property in the state.