I Want A Rematch, Ghanaâ€™s Agbeko Demands After Losing To Mares In U.S. 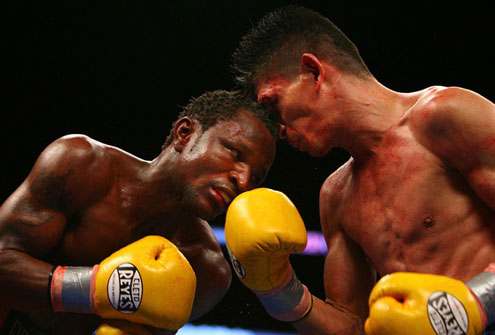 Maresâ€™ hard road to a world championship reached its destination Saturday, with a huge 11th-round push to the finish line by referee Mora.

The scoring was spoiled by Moraâ€™s decisions, with the worst gaffe being his 11th-round decision to award Mares (22-0-1) a knockdown when it was obvious the already warned challenger from Hawaiian Gardens threw a hard left uppercut that definitely qualified as a low blow.

Instead of deducting a point from Mares and avoiding pain to a sensitive area, Agbeko lost the round by a 10-8 score.

â€œI had two opponents in the ring: Abner Mares and the referee,â€ the Ghanaian boxer said.

Had Mora not given Mares credit for the knockdowns, and deducted points from him in the 10th and 11th rounds, Shellenberger and Byrd wouldâ€™ve scored the fight a draw.

Mora stunned the crowd by not previously taking away a point from Mares after other blows below the belt, and even his first-round ruling that Agbeko was knocked down by a Mares left looked amiss when replays showed Mares had stepped on Agbekoâ€™s foot right before the shot.

Agbeko lost his footing and stumbled through the ropes.

Besides the two poor knockdown calls, there were numerous low blows landed by Mares and Mora never penalised him. After 12 rounds of action, Mares won a 12-round majority decision to win Agbekoâ€™s IBF title. Agbeko is demanding an immediate rematch.

â€œI was getting hit with some very bad low blows. Mora wasnâ€™t warning Mares or doing anything about it. The referee should not have to steal my title and give it to Mares. I demand an immediate rematch. This fight doesnâ€™t make Mares a champion…no way,â€ Agbeko said.