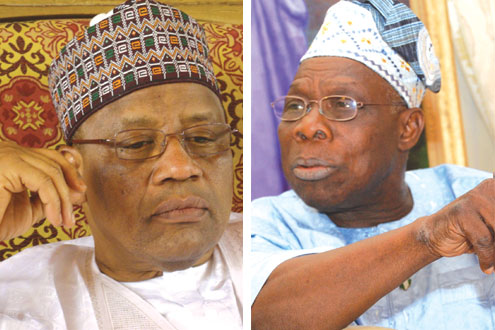 Obasanjo said Babangida should bury his head in shame for not coming up with a single power project during his similar eight-year rule.

Also, the Ota farmer did not mince words while slamming the former Director-General of Bureau of Public Enterprises (BPE), Mallam Nasir El-Rufai over his comments on the privatisation of the Nigeria Airways, affirming that he stopped the sale of the moribund company in the interest of Nigeria.

Babangida had on Tuesday at a press conference to mark his 70th birthday castigated Obasanjo for wasting $16 billion on the power project his administration embarked upon.

Obasanjo, who spoke with newsmen at his Presidential Library project site today where he met with some foreign investors, said at first he did not believe the report credited to IBB until â€œsomebody phoned me and said this was what he said.

â€œHe said check all the papers and I said get me all the papers. They got me the papers and I read them. Itâ€™s a little bit unlike Babangida. But if Babangida had decided, on becoming a septuagenarian, that he will be a fool, I think one should probably do what the Bible says in Proverbs chapter 26, verse 4. It says donâ€™t answer a fool because you may also become like him. When you go to the same Proverbs, chapter 26, verse 5, it says answer a fool so that he will not think heâ€™s a wise man. I am now torn between which of the two verses I should follow in this respect.â€

Obasanjo clarified that some of the allegations raised by IBB, â€œwere unfortunately not well thought-out. For instance, he talked about our energy. When I was the military head of state, I built Jebba dam; built Shiroro dam; I prepared the foundation of Egbin thermal plant which President Shehu Shagari completed and commissioned. That time the money we were making was not up to the money Babangida was making annually in his eight years and yet we built two dams.

â€œIt is important to know that power is the driving force for development and for any developing country. But since the building of Egbin power plant, until I came back in 1999, there was not any generating plant for almost 20 years and Babangida spent eight years out of that. Now, he has the audacity to talk about anybody, I think that is unfortunate.â€

â€œI wonâ€™t run my own affairs that way, so I opted for liquidation. So, it was bankrupted, it was liquidated; in which case whatever you gain from liquidation which is also a form of sale, it means the burden will be shared by all the creditors and everybody. If I owe you 10 dollars and what I sell when I am liquidated is two dollars, thatâ€™s what you get. I did not allow normal privatisation or sale because it would have put a very heavy burden on Nigeria. Nigerians should know that and in fact my administration should be commended for that. Itâ€™s not that I did not allow that sale because the law establishing it is to sell it but liquidation is also a form of sale.â€

Obasanjo declared that he was ready to show up at any sitting to explain himself on the issue and declared: â€œAnybody who wants me for any event, Iâ€™m available.â€

And when asked why these attacks were coming at this time, Obasanjo in his witty manner fired back: â€œI should ask you.â€