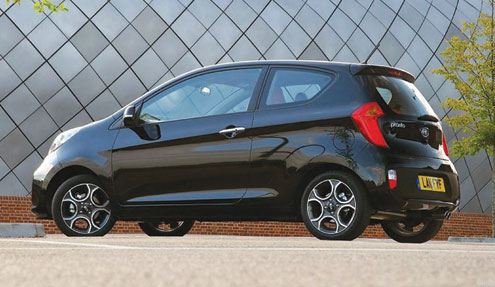 Following from the recent launch of the all-new Picanto city car, Kia is introducing a three-door version to the line-up for the first time since the model appeared in 2004.

The three-door Picanto has a unique, sporty character while still managing to deliver the same, seemingly contradictory, upgrades as the more family-focused five-door: stronger performance with lower fuel consumption and CO2 emissions, the safety and luxury features of a large car without an outrageous price tag, and practicality within a compact package. If the five-door Picanto is â€˜the small car, grown upâ€™, then the three-door is the same but with a twinkle in its eye.

Why Kia created the three-door:

A-segment car sales are increasing all over the world as the costs of buying and owning cars gets more prohibitive and many people are downsizing. Globally, the market for Picanto-sized cars in 2014 will be around 2.4 million. By 2015 â€“ well within the second-generation Picantoâ€™s life cycle â€“ that will have grown to 3.3 million. Around a million of these will be three-door cars. Without a three-door model, Kia would have nothing to offer 30% of buyers in one of the most dynamic sectors of the market.

The changes are most obvious in profile, where new doors, rear panels and glass aft of the A-pillar give the three-door Picanto a fresh, dynamic appearance, accentuated by the rising belt line that slices through the door handle on each side, and the aerodynamically shaped side sill mouldings. Unique alloy wheels on the upper two trim versions are other distinguishing features of the three-door Picanto.

At the front and rear the three-door Picanto reveals its own personality, too. The main grille opening is larger than that on the five-door and is available with silver or red trim surrounds. The front bumper has been re-profiled to make the car appear wider and lower. It contains a slim, full-width lower grille, housing large black-bezelled foglamps with the two upper trim grades.

The rear bumper has a rectangular black central section in place of body colour, a relatively simple measure that makes the three-door Picanto instantly appear sportier. The finishing touch is created by exposed twin chromed exhaust outlets in place of the hidden single tailpipe of the five-door car.

The three-door Picanto is a practical small car with five seats and a big boot within an overall length of less than 3.6 metres, just like the five-door. And while its primary role might not be as a family runabout, Kia has done everything to make access to the back easy for those occasions when owners might want to give a lift to friends or relatives. Sliding and tilting front seats provide a wide â€˜walk-inâ€™ to the split rear bench.

The three-door Picanto has its own colour schemes and trim structure that reflect its role as the sportier model in the range. The entry-level model â€“ badged Picanto 1 or, with air conditioning, Picanto 1 Air â€“ comes with all-black upholstery. Above that, the models are called Halo and Equinox rather than 2 and 3. Halo has premium black and grey interior trim, while Equinox is finished in premium â€˜Chilliâ€™ red.

Depending on engine and trim combination, there is a choice of four exterior colours, and alloy wheels are standard on all but â€˜1â€™ and â€˜1 Airâ€™ grade cars. Should the worst happen every Picanto has front, side and curtain airbags to cushion heads and torsos against impacts from any angle. Front seat-belt pre-tensioners and load limiters brace occupants against a crash impact while reducing the risk of chest injury.