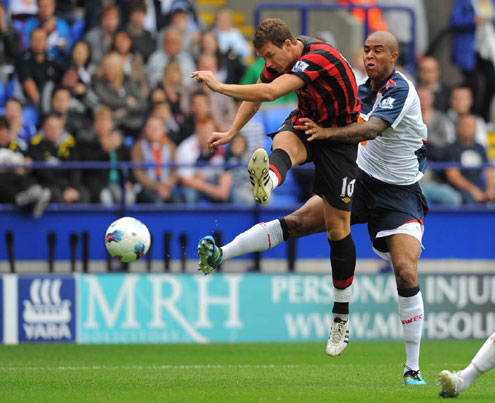 BBC Sports reports that David Silva gave City the lead in the Premier League match from the edge of the box when Jussi Jaaskelainen got his positioning all wrong.

The visitors took hold of the game again when Edin Dzeko fired in on 47 minutes and despite Kevin Davies heading in, City looked impressive.

Sergio Aguero could easily have scored twice before the break after good work by Dzeko, but he fired over and headed wide.

And overall it was a performance which oozed with attacking purpose with the City players interchanging positions with relative ease.

Carlos Tevez was named on the bench, eventually replacing Aguero, but the way in which Dzeko, Aguero and Silva combined will give City boss Roberto Mancini plenty of encouragement for the season ahead, whatever Tevez’s long-term ambitions.

Bolton struggled to match their opponents’ inventiveness at times, but in coming back twice to reduce a two-goal advantage, they showed they are a team who can compete with the more expensively-assembled Premier League sides.

At times they were outplayed, but Owen Coyle’s side began with real gusto, furiously harrying the City players to win the ball back and they twice went close early on with Joe Hart parrying Chris Eagles’ free-kick and Zat Knight volleying wide from a corner.

But as City settled, Silva, as is so often the case, began to dictate play by cutting in from the left and his pass allowed Aleksandar Kolarov to cross but Jaaskelainen brilliantly stopped James Milner’s effort.

The Finnish keeper was left embarrassed on 26 minutes, however, when he misjudged Silva’s low shot from the edge of the area.

Either side of the opener Aguero should have scored his third and fourth goals of the season after incisive crosses by Dzeko, but he put the first attempt over and then headed just wide.

There were many encouraging signs for the visitors, with the Bosnian looking comfortable on the ball and Silva a menace, and it was no surprise that City extended their lead on 37 minutes.

Barry collected a short corner from the right, and with time and space to shoot, he fired superbly into the top corner.

It looked as though an onslaught was on the cards but seemingly out of nowhere Owen Coyle’s side recovered through Klasnic.

Nigel Reo-Coker found Martin Petrov on the left wing and his quick-fire cross was swept into the net by the Croatian forward.

Any hopes of using that goal as a foothold in the game were soon ended when Dzeko established a two-goal lead again when he fired in two minutes after the break.

Once again it was a preventable goal, with Knight failing to deal with Milner’s hooked overhead pass, but Dzeko hustled him off the ball and fired low under Jaaskelainen.

That immediately put City back in control and where Silva impressed in the first half, it was Milner who began to orchestrate proceedings in the second.

Bolton’s second goal came against the run of play when Paul Robinson swung in a free-kick deep on the right and Davies rose to head expertly past Hart.

Mark Davies injected some attacking energy to their midfield but they could not find another way past a firm City defence and Mancini’s side could have scored again when substitute Adam Johnson delivered a teasing cross that Tevez could not connect with.

The City boss stated his intention to take more risks this season, and by naming two strikers from the start his side produced a performance that was as entertaining for the neutral as it would have been for the watching City fans.