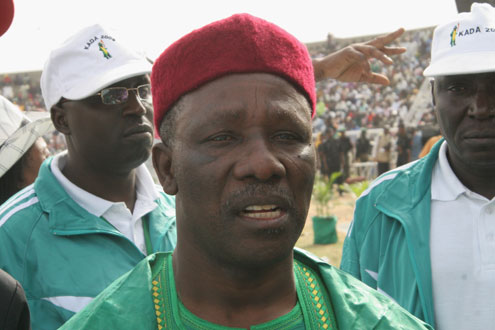 Wife of Kaduna State Governor, Amina Yakowa and her convoy today narrowly escaped a serious car fire explosion that caused pandemonium on the popular NEPA Roundabout within the metropolis.

P.M.NEWS gathered that the Kaduna first lady and her convoy were coming from the Sir Kashim Ibrahim Government House at about 1.45p.m. when a van waiting to be passed by the traffic light suddenly exploded.

The incident happened almost at the same time Amina and her aides were passing enroute to Kawo for an assignment.

Confused, she and part of her convoy were compelled to make a swift diversion to Waff Road since they were not sure if the sound they herad was a bomb explosion or a deliberate bomb attack aimed at her.

After the incident, rumour spread round town that Boko Haram has stormed the state. This caused serious panic as motorists and people around ran for safety while the vehicle continued to burn.

The fear is not unconnected with earlier threat by the sect to carry out bomb attacks in the state some weeks ago .

When P.M.NEWS got to the scene, soldiers, police bomb squad and other security operatives had already cordoned off the area and were putting out the fire.

The crowd that gathered far away from the scene explained that they suspected the explosion was caused by a bomb, but were unsure whether anyone was affected .

A soldier that spoke confirmed that it was not a bomb explosion but rather an explosion of a van owned by a car dealer called Faisal Mohammed.

Narrating to P.M.NEWS owner of the van, Faisal Mohammed said he was stopped by the traffic light and was waiting for the green light when he was alerted by some passers-by that his van was smoking.

According to him, when he came out of his car, the vehicle was already under fire and he had to run to Total filling station nearby to beg for fire extinguisher, which he could not get until the van exploded.