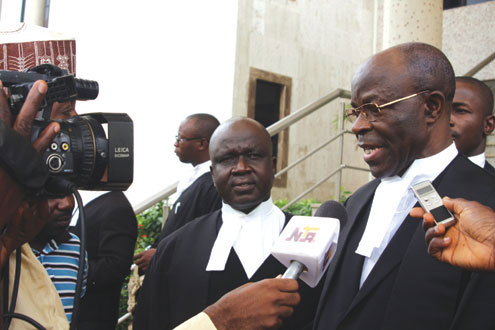 Hearing of the suit filed by former President of Court of Appeal, Justice Ayo Isa Salami, was on Wednesday stalled due to the refusal of the National Judicial Council to accept the service of court papers on behalf of members of the two separate panels constituted by the Council to investigate allegations raised by Justice Salami against Justice Katsina Alu, the immediate past chief Justice of Nigeria, who just embarked on his terminal leave.

At the proceedings this morning before Justice Donatus Okorowo at a Federal High Court sitting in Abuja, counsel representing the ousted President of the Court, Chief Akin Olujinmi, a senior advocate of Nigeria, told the court they have a motion exparte pending before the court seeking to set aside the actions of the National Judicial Council, especially the suspension of Justice Salami as well as the appointment of Justice Dalhatu Adamu as acting CPA by President Goodluck Jonathan.

Olujinmi told the court that a motion on notice was pending before the court and had been served on the NJC before they went ahead to suspend Justice Salami in a move calculated to over reach the court and called on the court not to turn a blind eye on such despicable act which he said is capable of undermining the integrity of the court.

The Counsel who represented the NJC, Mr. Aliyu Saiki told the court that the lawyer to the NJC, Mr. Lawal Rabana, also a senior advocate, directed him just last night to hold brief for him at the court today since he had travelled out of town and argued that the seven days statutory period for them to file their response had not elapsed and as such that the matter cannot go on.

He also stated that the other defendants in the matter are yet to be served and that when they are eventually served, they too will have to file in their replies within the stipulated time before the matter will be ripe for hearing and urged the court to grant an adjournment.

Consequently, the court adjourned to Wednesday 7th September and ordered that hearing notices be served on the defendants who had been served.

Though Justice Katsina Alu had been served, no lawyer represented him at today’s proceedings.

Speaking with PM News after the day’s proceedings, Chief Olujinmi slammed the NJC for suspending Salami despite the fact that they had been served the court papers of Salami’s case.

“A body comprised of eminently qualified jurists who had at one time or the other given directives on the preservation of the court’s integrity rushed into taking steps that will undermine the integrity of the same court by prejudicing a matter pending before a competent court. We want them to come and tell this court why they did what they did” the senior advocate stated.

Like Justice Katsina Alu, the acting Chief Justice of Nigeria, Justice Dahiru Musdapher who had been served with the court documents was not represented in court by any lawyer at today’s proceedings.