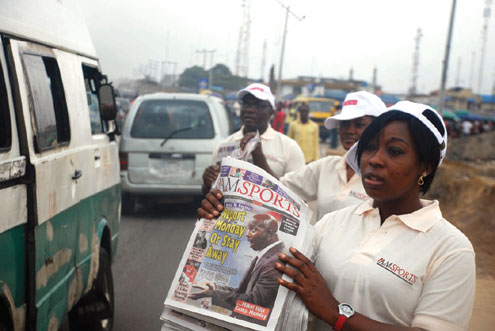 The staff of Independent Communications Network Limited, ICNL, hit the streets of Lagos this morning with the companyâ€™s new national sports newspaper, A.M. Sports. The sports newspaper was received with enthusiasm today by many readers during the direct sales promotion.

From Oshodi Centre, our staff reported that readers received A.M.Sports warmly and within two hours, the team almost recorded a 100 per cent sales by selling 86 out of 90 copies they marketed in the area.

From Ademola Adetokunbo, Victoria Island Centre, respondents commended the paper. They believed A..M.Sports would soon make its in road into the market despite brand loyalty of readers to existing sports journals. They called for improved quality in its production, especially sharp copy prints and photographs.

The majority of respondents at MUSON Centre, Onikan, Lagos area, appreciated the quality of A.M.Sports. A reader commended it for a good coverage of the other sports other than football.

The people believed it will go places if the paper could be made known to the readers.

At Ogba/Agidingbi area, the response to A.M.Sports this morning was average. Many respondents expressed love for the paper. They liked its balanced coverage of all the sports.

However, they called for more reportage of foreign sports, especially football.

Similarly, the Iyana Ipaja audience responded very well to the paper. They advised that the sales/circulation of A.M.Sports should be better coordinated.

The readers appreciate the content. Some of them called for more coverage of wrestling, one of the neglected sports, claiming they bought the copies because todayâ€™s A.M.Sports has stories on wrestling.

Most readers in Falomo, Burdillon Road and Awolowo road in Ikoyi axis said they were seeing A.M.Sports for the first time this morning. But the much-needed impact was made as some copies were sold while some copies were given out for free.

Many residents of Ajah responded positively to receiving A.M.Sports this morning, though the majority of them said they were seeing copies for the first time. They said the paper is a good sports journal with its many articles and were optimistic that the paper would be widely accepted like many existing sports journals.

The captivating headline, colourful pictures and neat planning was what endeared many people. At fiirst they were skeptical about buying the sports paper but once they had a closer and better look they were hooked.

The aesthetics of A.M. Sports was very different from those of existing sports papers and many people who spoke to P.M. NEWS told the paper that they liked the near-perfect blend of local and foreign contents in the sports newspaper.

A.M. Sports made its debut on the news stands on 8 August this year and has gradually but consistently found its way to the heart of many readers.

Kunle Ajibade, the team leader of Agidingbi/Ogba axis, assured the inquisitive readers that A.M. Sports was produced by professionals who have a genuine passion for sports in Nigeria.

He said the company delved into producing sports paper because of their passion for sports locally and internationally.