How Mercy Johnson Defied All Odds To Marry Sweetheart 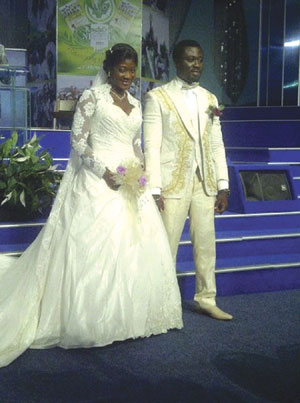 Mercy Johnson stepping out from the altar at Christ Embassy after exchanging marital vows.

The star-studded wedding tagged â€˜The Triumph of Loveâ€™ was held amidst tight security and anxiety over the shape the much anticipated ceremony would take.

P.M.NEWS learnt the decision of the church to go ahead with the wedding despite the furore generated by the revelations that Mercyâ€™s groom, Odianosen was still married to another woman, Lovelyn Okojie, came as a surprise to many people. They had queried the morality of the whole exercise.

Following the absence of controversial Senior Pastor of the church, Chris Oyakhilome, the next most senior minister in ranking, Pastor Tom Obiazi, went ahead to officiate and bless the union.

However, contrary to the normal conventional moment during any church wedding ceremony, when the officiating priest asks if anyone in the gathering has any objection to the wedding, the aspect was cleverly skipped by Obiazi, who went ahead to bless the couple.

Speaking shortly after the church service, elated Mercy said the day was a day of joy for her.

â€œI am so happy that today (Saturday) came to pass. It is a leap of faith for me and I believe God will be with me. I thank all those who stood by me especially my family, friends and colleagues. Today shows that love has triumphed,â€ the new bride enthused.

The holy matrimony will go down in history of the Nigerian film industry, as the most glamorous and controversial.

â€œThis is strange. I have never attended a church wedding where the priest skipped such important aspect. It means the church itself still believed something fundamental is still wrong with the union. But I donâ€™t blame them, they are just trying to avoid any form of embarrassment for the couple and themselves,â€ a guest who simply called herself Maureen told P.M.NEWS after the church service.

After the announcement of their engagement and four-day wedding extravaganza in May, Okojie had on 12 July, 2011, started a divorce proceedings from his estranged wife, Lovelyn at the Igueben Area Customary Court, holden at Igueben, in the Customary Court of Edo State.

In the divorce suit No:- IACC/14/2011, Okojie had prayed for an order of dissolution of the traditional marriage contracted sometime in October 2008 at Eko Udo, in Igueben Local Government Area between his estranged wife and himself, through their respective lawful attorneys, Prince Tom Okojie and Mr. Aletor in accordance with the prevailing Esan Native Law and Custom of Udo on the ground that the â€œsaid marriage has broken down irretrievably owing to Lovelynâ€™s acts of hostility, hatred, cruelty and quarrelsomenessâ€ towards him (the petitioner).

He also prayed the court to allow him refund the N100 (One hundred naira) bride price he paid on Lovelyn in respect of the said marriage which produced two kids, named Miss Precious Ofure Okojie, 5, and Master Harmony Okpeibbo Okojie, 3.

Less than 72 hours to the commencement of the wedding, the court granted him all his prayers and the path was cleared for Odianosen to marry Mercy.

Also speaking with P.M.NEWS at the reception, Blessing Johnson-Oyegun, one of the actressâ€™ four sisters, said the event of some weeks ago leading to the marriage was â€˜so scaryâ€™.

According to her, at a point the family became pessimistic of the whole preparations given the controversy that the marriage plans generated.

â€œWe were so happy that the day turned out a success. It is a wonderful day, though the event that had led to the wedding was so scary. There was a time we were so pessimistic whether the wedding will actually take place. But through fervent prayers and the help of a section of some media, here we are today,â€ she said.

Mercy is one of the most popular young actresses in the Nigeria home video industry. Since her breakthrough in the industry, she has found herself enmeshed in one controversy after the other in the industry.