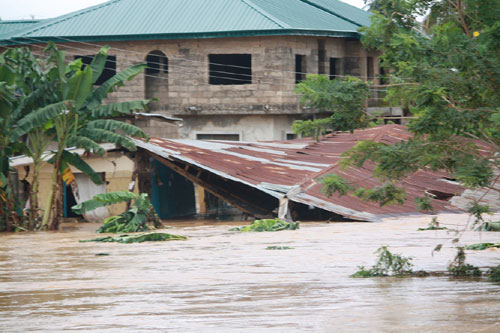 The death toll arising from the flood that ravaged Ibadan, capital of Oyo State last weekend, has risen to at least 100.

The official figure of the dead, according to government agencies including the police in Oyo State, is 30.

Â P.M.NEWS reliably gathered that rescue teams working in the areas affected by the flood, are still recovering more bodies while a number of people are still missing.

There were cases where entire families were wiped out by the flood and some losing as many as seven children.

Families of the deceased were seen weeping while neighbours were tried to console them.

At the University of Ibadan, UI, staff of the institutionâ€™s bookshop and Idea Consult were seen mopping up the flooded premises.

At the time of filing this report, relief materials were being distributed at Abbey Technical College, Odo-Ona to the affected victims.

Also, two relief camps have been opened at Apete and Odo-Ona as temporary refuge for thousands of displaced victims.

Although the Oyo State Governor, Abiola Ajimobi, has reportedly cut short his pilgrimage to Mecca, he is yet to arrive the country.

Commiserating with the affected victims, Accord Party and Peoples Democratic Party (PDP) called for efforts to be geared towards preventing such incident in future.

A statement signed by the state chairman of Accord Party, Architect Bashir Lawal, called on National Emergency Management Agency, NEMA, and the state government to quickly come to the aid of the victims as their losses are huge.

PDP in a statement signed by its state Director of Publicity, Barrister Morunknola Thomas, regretted the huge loss of lives and property.