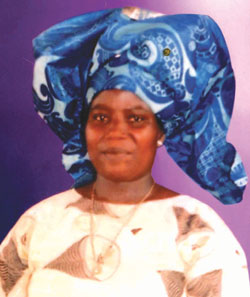 Detectives of the Ogun State Police Command in Southwest Nigeria in cooperation with International Police, INTERPOL, have begun a manhunt for a Beninoise, James Gomugomu, 44, who allegedly poisoned his blind wife and buried her secretly without the consent of her parents.

The deceased, Kabirat Bamgbose, 42, hailed from Ishaga, in Lusada area of Atan Ogun State. And she left behind seven children, two for her first husband and five children for James Gomugomu.

P.M.NEWS investigation revealed that when Kabirat left her first husband she married Gomugomu as second wife. But on a particular morning, she woke up in the morning and went to take water from a container to wash her face and she became blind instantly. Efforts were made to restore her sight, but they proved futile.

When there was no improvement she was allegedly poisoned by her husband.

According to Kabiratâ€™s elder sister, called Rashidat, â€œHe just killed my younger sister and he is boasting that he has done it and nothing will happen.

â€œHow can someone use water to wash her face and go blind if the water is normal? The pot containing the water was the same she usually took water from every morning.

â€œWhen she became blind he came to dump her here but we told him to go and take proper care of her before returning her to us. But when Kabiratâ€™s situation was getting worse she phoned to say she was going through hell in the hands of her husband and first wife. She later died without our knowledge.

â€œIt was after a family friend called Andrew visited Gomugomu to ask of his wifeâ€™s condition that he told him she was dead four months ago and he had buried her. We also learnt from people that he poisoned her. It is a taboo for anybody from our family to die and be buried outside. We want to see her corpse. Gomugomu has run away and his phone is also not going through.â€

Kabiratâ€™s first husband, Suleiman Olaleye, 49, a native of Olorunshola in Ado-Odo Local Government area of Ogun State, said: â€œHer death is painful. We had a minor disagreement because I warned her to desist from keeping a friend who was flirting around and she got angry and left me. Her children with me are Rukayat 23, and Nafisat 20.â€