Jonathan: This Is a Challenging Time for Nigeria's Judiciary 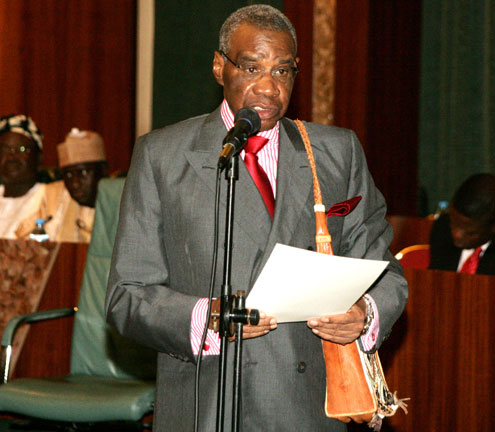 President Goodluck Jonathan has sworn in Justice Dahiru Musdapher as the Acting Chief Justice of Nigeria, CJN in replacement of Justice Katsina Alu who clocked the mandatory 70 years retirement age yesterday against the background of a raging crisis in the judiciary.

Indeed, the President himself acknowledged that these are unusual times in the Nigerian judiciary in a brief speech he delivered after the equally very brief ceremony.

President Jonathan noted in the sppech that the new CJN is taking over at a very challenging period in the Nigerian judiciary: â€œHonourable Justice Dahiru Musdapher is assuming office at a challenging period, not only for the judiciary, but for the larger society which looks up to the judicial arm of government as an impartial and courageous arbitralâ€.

He however added that with the antecedents and compelling experience of the new CJN, he will be able to â€œrise up to these challenges and rekindle the peoplesâ€™ faith and confidence in the judicial systemâ€. The President who has come under heavy criticism in recent days with the way he handled the issue of the President of Court of Appeal however restated the commitment of his administration to rule of law and independence of the judicial arm of government.

â€œOn our part, I can assure you that this administration is totally committed to upholding the tenets of rule of law and independence of the judiciary. We shall continue to engage with the judicial and the legislative arm of government on the basis of mutual respect and productive engagementâ€, said President Jonathan.

The President also paid tribute to Justice Dahiruâ€™s predecessor in the office, Justice Katsina Alu who he said â€œbowed out after a distinguished career in our nation’s judiciary and worthy service to Nigeriaâ€.

â€œ We owe him a debt of gratitude for providing effective and courageous leadership to the judicial arm of government at a critical period in our nation’s political developmental historyâ€,

â€œ As he retired from active service, it is my hope that he will remain ready and willing to continue to avail the nation of his worthy attribute of courage, diligence and selfless service and uncommon patriotismâ€, the President said of Katsina Alu whose tenure has been remarkable for the numerous controversies and disagreement with key stakeholders in the Nigerian justice system, notably the Nigerian Bar Association, NBA.

While speaking to journalists after the event, Justice Dahiru acknowledged that all is not well with the Nigerian judiciary.

The new CJN acknowledged the fact that the confidence of Nigeria in the judicial arm of government is ebbing and that reversing this will be one of his key priorities in office. He added that ending the delay in the treatment of cases will also be one of his priorities.

Born in Gbagura town in the present Jigawa State on 15 July 1942, Justice Dahiru was elevated to the Supreme Court from the Court of Appeal in 2003. He had also served as the Chief Judge of Kano State and the presiding judge of Jos, Lagos and Abuja Division of Court of Appeal. The swearing in ceremony was witnessed by the other Justices of the Supreme Court, Mohammed Adoke, the Attorney General of the Federation and Minister of Justice, and some members of the cabinet among others.