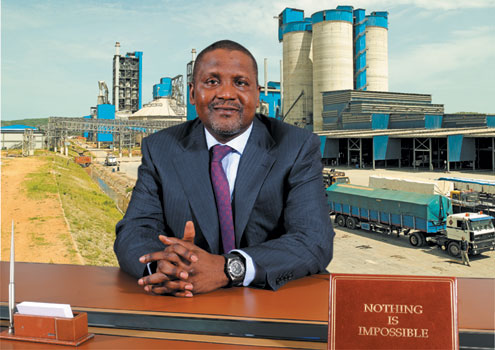 President Goodluck Jonathan took an unusual measure at tackling Nigeriaâ€™s wobbly economy a fortnight ago when he constituted a 24-man Economic Management Team, EMT. To ensure that decisons of the EMT are effectively implemented, the president set up a 15-man Economic Implementation Team headed by the Co-ordinating Minister for the Economy and of Finance, Ngozi Okonjo-Iweala.

Unlike earlier membership of the federal governmentâ€™s EMTs which relied mainly on public servants, Jonathan has chosen this time to borrow extensively from the wisdom of proven achievers in the private sector. Leading the businessmenâ€™s pack is Aliko Dangote, Chairman of the Dangote Group and Africaâ€™s richest man. Dangoteâ€™s investments span cement, sugar, salt, juice, spaghetti, macaroni and water production. Outside of government, the Dangote Group is the highest employer of labour. Beyond Nigeria, the Dangote Group has been investing across Africa and is expected to be firmly established in manufacturing of cement and sugar in, at least, 14 countries on the continent by 2012.

Also in the team is the young Group Managing Director/Chief Executive Officer of Access Bank plc, Aigboje Aig-Imokhuede. The banker has taken Access Bank from a largely unknown financial institution to being one of the leading banks in the country. The bank just got bigger with the merger with Intercontinental Bank plc, one of the troubled banks rescued by the Central Bank of Nigeria, CBN. Chief Kola Jamodu, president of the Manufacturers Association of Nigeria, MAN, and Atedo Peterside, former Chief Executive Officer of IBTC and current president of the Nigerian Economic Society are also in Jonathanâ€™s EMT.

Jonathan himself leads the government party as chairman of the EMT, with his Vice, Namadi Sambo, as his deputy. Two state governors – Anambraâ€™s Peter Obi, Honorary Adviser to the President on Finance and Adamawaâ€™s Murtala Nyako, Honorary Adviser to the President on Agriculture – are also part of the team. The Ministers of National Planning, Trade and Investment, Power, Petroleum Resources, Agriculture, Works, Education, Health and the ministers of state for both Finance and Health are also on board.

Members of the organised private sector have been lauding the inclusion of their own in the economic team. Jonathanâ€™s pick of Dangote, particularly, has been greeted with kudos for the president. John Olawale, an economist and Managing Director/Chief Executive Officer of Upright Consultants said apart from the vast experience in business and fiscal management that Dangote is bringing to this national assignment, he flaunts a global integrity that he would want to guard jealously. Olawale argued that leaving the national economic management entirely in the hands of public servants has been a major problem towards economic policy formulation and implementation. With the level of unseriousness and corruption that ravages the corridors of power and public service generally and their poverty of the necessary practical experience in business and economic management, public officials and technocrats alone cannot make a success of managing the national economy. President Jonathan has done reasonable well to include tested and trusted private sector managers in his Economic management team,â€ the economist asserted.

President of the Abuja Chamber of Commerce and Industry, Mines and Agriculture, ABUCCIMA, Barrister Dele Oye, commended Jonathanâ€™s initiative as a strategic step he believed would stabilise Nigeriaâ€™s ailing economy. Oye maintained it has always been wrong for government to constitute economic teams that proposed policies designed to regulate business in the economy without including the players for whom such policies were designed. It is a wise move to include Aliko Dangote and others. They are actually the ones who know where the shoe pinches,â€ the ABUCCIMA boss said.

Bismarck Rewane, renowned management consultant and Chief Executive Officer of Financial Derivatives, remarked that Nigerians would be expecting to see from the team ideas that are different from what Nigerians have become used to and which have been unproductive to the economy.

But as some economic experts were quick to warn, the hood does not necessarily make the monk when it comes to managing the Nigerian economy. Including men of integrity and experience like Dangote will not automatically translate to a successful turn-around of the Nigerian economy. Chudi Nnaji, a banker, feared that the private sector eggheads Jonathan has brought on board his Economic Team might be frustrated by dishonest implementation of the constructive policies they would have worked hard to formulate. Nnaji is not yet convinced that Jonathan has the will to fight the â€œextremely greedy and corrupt top officialsâ€ that have always hampered faithful implementation of good policies. â€œIbrahim Babangida gathered a lot of brilliant economic minds from the universities and research institutes to work with him on policy formulation when he was military president. What happened? The economy went from bad to worse because Babangida arrogated implementation to himself. And Babangida, the truth must be told, lacked the financial discipline to manage the economy, especially the Structural Adjustment Programme which he introduced. He and his men went wild. It has been the same story with his successors,â€ Nnaji noted.

Olawale agreed with Nnaji that at the end of the day, the buck will stop on Jonathanâ€™s table in transforming whatever ideas Dangote and his private sector colleagues will generate for the Economic Team into fruitful reality. Could this be another merry-go-round? Only President Jonathan can provide the answer – in practical sense, that is.