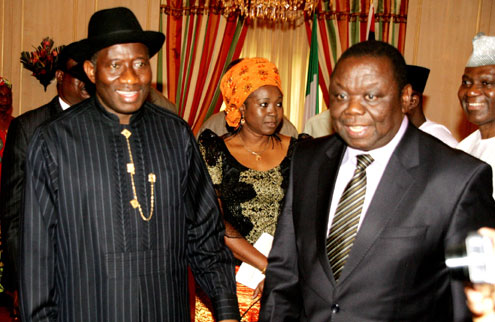 He stated that, â€œall African countries have a responsibility to ensure that Zimbabwe does not go back to the crisis of the past with the consequent loss of livesâ€, adding that Nigeria would support the SADC, which is the regional grouping for Southern Africa, in all efforts for successful elections in Zimbabwe.

President Jonathan said Africans must show they can conduct peaceful, transparent and credible elections that create the stable socio-political and economic environment required to encourage investments for economic development, adding that â€œthe will of the people must be respectedâ€.

He said lessons learnt from Kenya and Cote dâ€™Ivoire, among others, should be utilised in Zimbabwe and other African nations, to avoid any crisis arising from elections.

President Jonathan thanked the Zimbabwean Prime Minister for coming personally and for the extensive briefing on the situation in his country as preparations are made for conducting national elections next year.

Earlier, Rt. Hon. Morgan Tsvangirai, had told President Jonathan that all efforts were being made, under the auspices of the SADC to conduct free and fair elections in Zimbabwe next year.

He said his country â€œwants Nigeria and the African Union to take an active role in the processâ€, adding that this would create the peaceful environment needed for successful elections in Zimbabwe. Mr. Tsvangirai thanked President Jonathan for Nigeriaâ€™s support.