Mikel to Jonathan: Thanks for Rescuing My Father 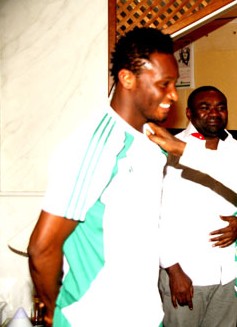 PRESIDENT GOODLUCK JONATHAN WITH SUPER EAGLES AND CHELSEA FC MIDFIELDER, MIKEL OBI DURING HIS THANK YOU VISIT TO THE STATE HOUSE FOR QUICK RESPOND BY THE FEDERAL GOVERNMENT WHEN HIS FATEHER WAS KIDNAP.

Speaking to the President at State House, Mikel said his â€œentire family appreciate your help to us during this difficult time,â€ adding that his father was recovering from the mainly psychological and physical injuries he suffered.

He said he was encouraged to put in his best for the national team in their forthcoming national assignments, particularly the African Nationsâ€™ Cup qualifier in Madagascar, adding that the Super Eagles were ready for the encounter.

Responding, President Jonathan described the kidnap of Mr. Michael Obi as â€œunfortunate and sad,â€ but said government would continue doing all that is possible to guarantee safety of all citizens and non-citizens resident in Nigeria.