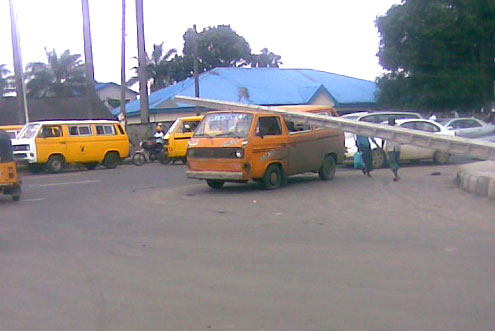 There were multiple accidents today 2nd Sept 2011 at about 11 am when an electric pole fell on a comercial vehicle at Yaba Bus Stop right beside the Yaba Presbytarian Church. These caused seriouis traffic jam on the road as commuters had only a narrow part of the road to pass through.

There were accidents today at Yaba, Lagos, Southwest Nigeria. One of the accidents occurred at about 11 a.m. when an electric pole fell on a Danfo commuter bus at Yaba Bus Stop beside the Yaba Presbytarian Church.

According to Babade Ayobayo, who witnessed the incidents while he was on his way to the University of Lagos, “the accident caused serious traffic jam on the road as commuters had only a narrow part of the road to pass through.

“There was also another accident close to the spot the first occurred as a result of the earlier accident. This was between a trailer and a space bus with Abuja plate number.

“No life was lost in the accidents but there were a few injuries.

Ayobayo said he overheard people at the scenes of the accidents making comments such as “government should be more careful about the people whom they give their contracts to” and “nothing can be done right in Nigeria; even fixing an ordinary electric pole”.