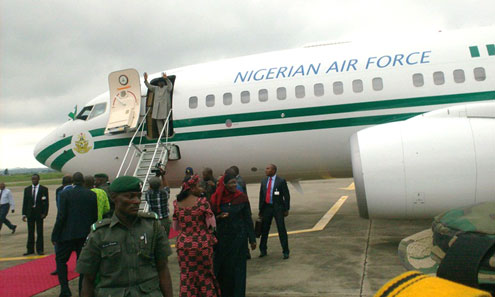 Jonathanâ€™s visit comes only days after floods wreaked havoc in the state, killing scores of people, injuring many others, damaging several bridges and destroying many buildings.

The floods, described as the worst to have ravaged Ibadan in recent times, also swept away many people, including children and a family of six.

P.M.NEWS observed that heavily armed soldiers, policemen and other security agents were deployed at strategic locations across the state to beef up security around the president.

He is expected to visit the Olubadan, Oba Odunlana Odugade I.

Those who received Jonathan on his arrival at the airport also included the PDP Vice-Chairman in the Southwest, Tajudeen Oladipo, former deputy governor, Taofeek Arapaja, Jumoke Akinjide and several other dignitaries.

There was a strong presence of the Peopleâ€™s Democratic Party, PDP, members and the Action Congress of Nigeria, ACN.