Reggae Music Is Not Dead 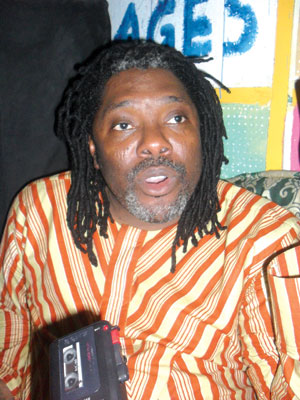 I am Rigtheousman Erhabor, a minister of gospel, an ordained apostle and the president of Praise Affairs International. I am a father, husband and group leader.

For some time now, you have been sitting in limbo, what happened?

I have been working as I have no other job except music. I am into full time gospel. In a way, it is not just music but the words. I am always working, we are in studio now and this is my kitchen where I cook music. You know we donâ€™t release music everyday, I have just finished work on my new album that will be released soon, by the grace of God, on Monday, I will be in the United States of America to prepare the release of the album in that country. However, it is not music all the way for Righteousman because recently, I came out with a book entitled A Little Part Of Me. It is a book of quotes that gives you reason to think and last month, I released another book entitled Push, Pray Until Something Happens. I will also release the book overseas and by the time I return, my digital video disk will be released in Nigeria.

One thing you must know is that reggae music is life and you must be a prophet to play the music and apart from that, if you have been following the music of Righteousman, you will know that I am always a messenger but an official one now. It is not about the office but the life you live. Being ordained an apostle is not enough, even to me, the name Righteousman is bigger than the title apostle. To have a right stand with God is more than the title of apostle, but the life you live is more important to God.

After committing so much sin, you decided to retrace your steps?

No, I donâ€™t know what you mean by sin, I am not a killer, or an armed robber, one way or the other, we sin against God in our ways, there are so many ways you can sin against God, but if you have been following Righteousman, I am just careful with what I do.

Why did you leave Nigeria sometime ago?

That was long time ago, I did not really stay long but I have been in and out of the country playing music.

What has become of reggae as a brand of music?

Reggae is alive, there are reggae stars, the Kimonos of the world, Majek Fashek, go and listen to my music, it is reggae but the content is gospel. If you say reggae music is dead, I donâ€™t know what you mean by that; how many times did you work on the street and listen to Afro music, can you say it is dead? We donâ€™t see youths play Afro beat music because it is evergreen. Even high life, people donâ€™t play like Sunny Ade again but when you listen to Sunny Adeâ€™s music, you will see it is evergreen, that is the class where reggae music belongs. It is not Nigerian music but world music, if reggae music is dead in Nigeria, it does not mean it is dead in the Caribbean. Some products are selling in Lagos and not selling in Benin and vice versa. I can mention about five artistes that are making waves in Edo State but not popular in Lagos. I can tell you I stay in Lagos but I am from Edo and can tell you how many times 9ice has performed in Benin, but he is popular. I can also tell you how many times Daddy Showkey has played over there, you donâ€™t hear about Showkey here but he has been playing shows over there. If Daddy Showkey had played 50 shows maybe 9ice would have played four, so that is it.

But it seems there is downward trend in reggae music?

Well, it is like asking me what happened to Felix Liberty, Jide Obi or Tera Kota and so many of them. The world is a vicious cycle and it is moving round, I am still relevant, if not, we will not be discussing now. I am still waxing stronger and playing my music, what is Buchi playing, is it not gospel-reggae? And he is selling more than the hip hop artistes in Nigeria. I am talking about sales not media, radio or TV hype, the only music you can export to America now is gospel and reggae music.

But you will agree with me that reggae music is not as popular as before?

No, it is a world class music, so if it is not happening here for you, you have to move to another location, go to UK, Europe and America, if you travel to these places, you will realise that reggae CDs are the most expensive to buy. Reggae concerts are the most expensive to watch like in Nigeria, we celebrate hip hop like Jay Z and Kanye West, but when you check the records, rock artistes are more popular and richer, but you donâ€™t hear much about them.

Is that why you guys travel to Europe, that is, Ras Kimono, you, Majek and others; in fact, where is Majek?

Majek is okay, he had a show last month and he is about to release another album.

When last did you speak with him?

That was when he was in Nigeria, we even did a song together in the album I am releasing soon. Majek is a spiritual person, the only thing I know about him is that he drinks a lot. I used to drink but no more.

Why did you stop?

I stopped because I have had enough and because what I would have drank for 100 years was rushed in few years.

Why is reggae linked to wine, women and weeds?

I donâ€™t think it is reggae alone, it is the nature of man, even footballers, mechanics and others, we are not as bad as painted. Hip hop artistes smoke and drink too.

I know you know more than I do.

What about the link between Rastafarians and reggae?

I know that you will wonder why I was ordained an apostle with my dreadlocks. Well, I am not a rastaman and will never be one, I love reggae music, I love the message, I came to Lagos when I was young, Felix Duke and I. I love Baba Fela Anikulapo-Kutiâ€™s music, but even when he was alive, I never went to the Shrine.

So you donâ€™t smoke Igbo?

I play reggae music, yet I donâ€™t smoke cigarette or ganja, but I used to drink and have always believed that the day I smoke ganja I will run mad because I know that I have very light brain.

So your dread is natural?

It is. Okay, initially I did not want to answer some questions directly, but now I will say this about what happened to reggae music and all that. So, let me answer you directly. Reggae music, to me, is not a religion and when you want to make it one, it will be difficult to convert followers. It is like when we have so many religions nowadays. People still believe in one pastor than the other, even in Pentecostal churches. Rastafarian can be a religion that people believe in and Hale Selassie and others, but reggae music is not a religion.

But some of you believe in it?

Okay, let me define it. We have some rasta men who are not musicians, they believe in rastafaria, there is nothing like believing in reggae music because it is like any other brand of music, like hip hop, R&B. In fact, we have some rastafarians who donâ€™t even wear dreadlocks, you donâ€™t need a dreadlocks to be a rastafarian.

What of rastas who are musicians?

Yes, Ras Kimono is a rastafarian, he has his own belief and I know he still believes in God, so every man knows what he wants, while everybody has his own passion like I have passion for Jesus Christ, He is my lord and saviour and I believe it is not about dreadlocks or life, but the music.

But reggae is still problematic?

Well, maybe you want to hear the kind of roots reggae like the One Drop era, not even in Jamaica, they donâ€™t do it any more. Reggae music is like a tree or foundation from which Hip hop music came out. If you listen to Mode 9, P-Square and othersâ€™ music, you will see some elements of reggae music in them as well as some people with dreadlocks. How did Timaya emerge, was it not through dance hall music? Reggae is dance hall and dance hall is reggae. Because some people cannot define music, they give it bad name, donâ€™t forget the fact that life itself is changing; Tera Kota was there, he is old now, D’banj and others are there now and they will one day grow old.

How do you get your inspiration?

How long are you going to be there?